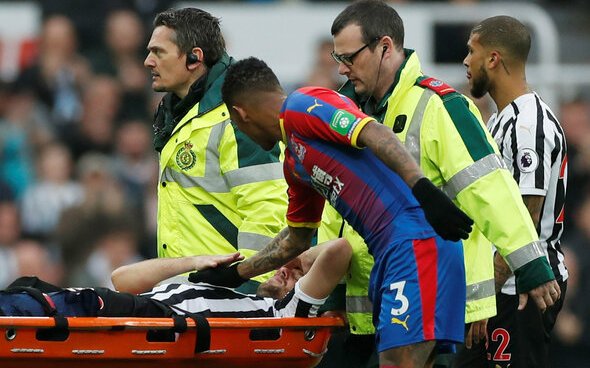 Steve Bruce has confirmed that Newcastle United defender Florian Lejeune has returned to training after his injury.

The French defender ruptured his anterior cruciate ligament in April against Crystal Palace at St James’ Park, only a year after he suffered the same injury to his other knee.

The 28-year-old struggled for game-time in the North East last season due to an injury, as he only managed to make 12 appearances for the club last season in the Premier League.

Lejeune is yet to return from injury to play for the Magpies this season, but Bruce confirmed as quoted by the Shields Gazette that the defender had returned to the pitch after his injury, and clearly was impressed.

“Florian was out on the pitch, which I was amazed at,” said Bruce.

“I think he’s three-and-a-half months. I think he got back playing four months last year, which is quite remarkable for a cruciate. Whether that had any effect on the other one, you’ll have to have doctors.”

“It’s incredibly quick to come back on the pitch, so he’s done remarkably well. Good to see him – he looks a very, very good player.”

Bruce is obviously clearly excited for Lejeune to return to the first-team squad for Newcastle. Given the struggles that the Magpies have already had in defence, the Frenchman surely has a great chance of returning to the fold as soon as he is fit. Since joining in 2017, Lejeune has only managed 36 appearances in the top-flight and will be looking forward to getting a string of matches under his belt and making an impact on the Newcastle squad. The 28-year-old doesn’t shy away from the hard work in the heart of the defence and averaged 2.1 tackles and 1.8 interceptions each game according to WhoScored. As well as that, the colossus also managed to average 3.7 clearances – proving he can also adopt a no-nonsense approach when it’s needed. After conceding just the one goal against Arsenal, and looking relatively solid against the Gunners, Newcastle came undone against Norwich City – conceding three in a display that has quickly caused fans to ridicule the Magpies’ defence. Lejeune would be a welcome addition to the backline in the North East, and his return seems to be getting closer with each passing day.