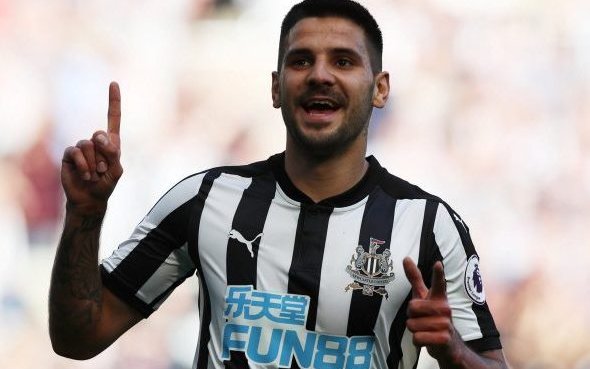 Fulham attacker Aleksandar Mitrovic shared that he had a good relationship with Newcastle United owner Mike Ashley when he was at St James Park.

The Serbian forward was asked by Jim White whether he had a good rapport with the Magpies chief after he shared he got on very well with Fulham’s Tony Khan.

Mitrovic responded by saying that while he was aware some people don’t like Ashley in Newcastle, the businessman was always good to him.

Mitrovic may never have set the world alight at St James Park, he managed just 17 goals in 72 outings for them, but he was always a fan favourite. The 24-year-old attacker always played with passion, sometimes resulting in needlessly red cards, and that was something that was appreciated by the Geordie faithful. However, his remarks about Ashley are likely to go down like a lead balloon, after all Ashley isn’t exactly popular amongst Newcastle fans to say the least. Yet Newcastle fans should bear in mind, Mitrovic can only deliver a verdict on the Magpies owner based on his interactions with him. The Fulham attacker probably had only a few moments with Ashley during his time at St James Park as he even openly said he didn’t see him much. Then again given that Ashley was the one to sanction Mitrovic’s exit from the club, you feel he’d have a more negative view on the businessman. However, maybe he is just so grateful that Ashley let him go to Fulham as he seems happy at Craven Cottage, when you consider he has signed a five-year deal with them despite them being in the Championship (Source: Transfermarkt). After all the forward probably had plenty of offers to leave Fulham after wowing in the Premier League. The 24-year-old scored 11 goals in 37 league outings last season and impressively averaged 3.5 shots per game (Source: WhoScored).