Everton attacker Yannick Bolasie sent Newcastle United winger Rolando Aarons a message on Instagram after the Magpies player reflected on the club’s pre-season tour of China coming to a close.

The 23-year-old Magpies player took to his personal Instagram to state that his trip to China had been a pleasure, and he also shared a snap of him featuring in the 1-0 win against West Ham.

“Its been a pleasure China,” wrote Aarons.

“Pace man like that, R F,” wrote the Toffees winger.

The Magpies winger was quick to play down Bolasie’s praise as he sent the Toffees attacker a five-word message to point out he was still rusty. 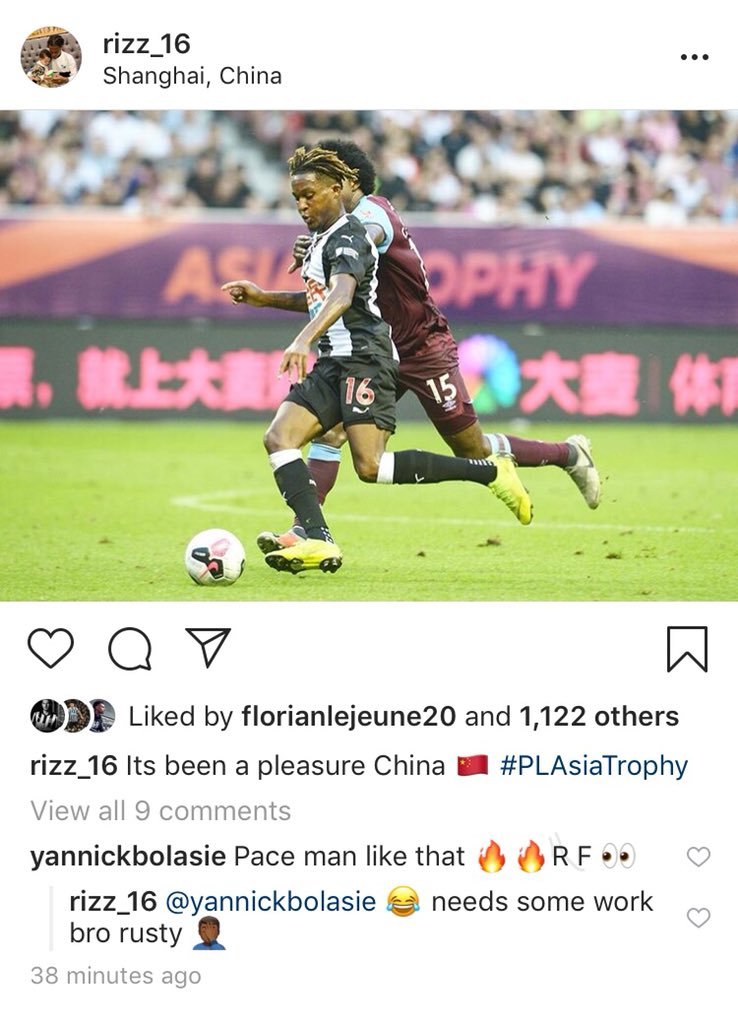 Both Aarons and Bolasie have impressed at different times during their careers due to their pace, but it seems Aarons doesn’t think his pace deserves praise at this time. The 23-year-old burst on to the scene at St James Park in the 2014/15 season, and has so far appeared a total of 27 times for the club. While Aarons looked like having a very bright future when he broke into the first-team to showcase his pace and dribbling skills, it’s fair to say his career hasn’t gone to plan as of late. The Magpies loaned out Aarons to Italian side Hellas Verona for the second half of the 2017/18 campaign, before he had two separate loan spells in his latest campaign. The winger spent the first half of the 2018/19 season at Croatian side Slovan Liberec, where he failed to score or register an assist in 13 outings, and then had a temporary spell at Sheffield Wednesday in the second half of the campaign. Aarons did better at Sheffield Wednesday then expected as he scored one goal and assisted one in his league outings and averaged a rating of 6.85, which isn’t too shabby (Source:WhoScored). However, given it’s been a while since he lit up the Premier League, it’ll be a surprise if he is in the team to face Arsenal in the opening game of the season.