Ayoze Perez has thanked Alan Shearer for his good luck message after the 25-year-old finalised his move away from Newcastle United on Thursday.

Perez has joined Leicester City on a four-year deal as the fall-out from Rafa Benitez’s exit from St James’ Park continues.

The ex-Tenerife attacker was the Magpies’ top goalscorer last season and enjoyed what was undoubtedly his best season in black and white stripes.

Toon hero Shearer wished his best to Perez after the move was confirmed on Thursday, to which Perez responded via his personal Twitter account.

“Thanks legend! Say good things to Gary Lineker about me,” he said. 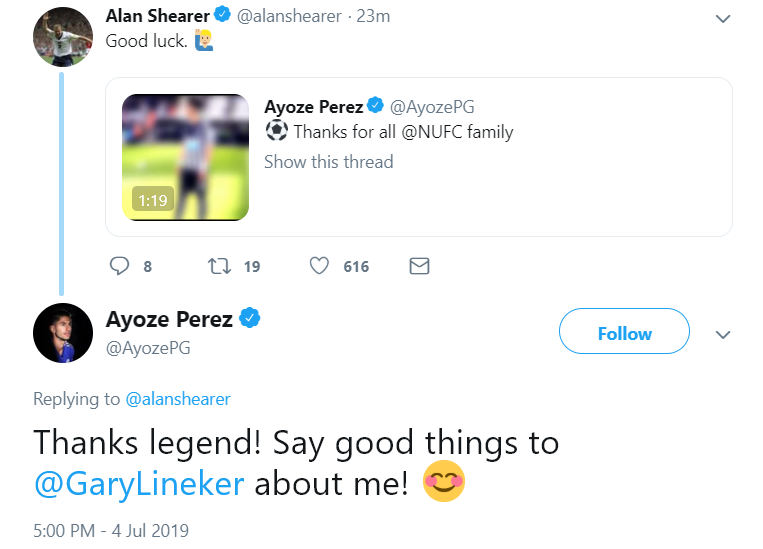 Lineker is bound to know a lot about Perez already due to working alongside Shearer on Match of the Day for so many years and after the Spaniard’s solid form at the end of last season, Lineker – like every Leicester fan – is bound to be excited by the attacker’s arrival in the East Midlands. Even though Salomon Rondon was Newcastle’s player of the season in 2018/19, Perez outscored the Venezuelan by hitting the back of the net on 13 occasions in his 41 appearances across all competitions. Perez’s form really lifted once Miguel Almiron was snapped up in January by the Magpies and in the final nine games of the Premier League season, the new Leicester man scored eight goals. During that run he scored a winner against Leicester and bagged a hat-trick against Southampton. Brendan Rodgers has done well to sign Perez and Newcastle fans are understandably upset to see him go.