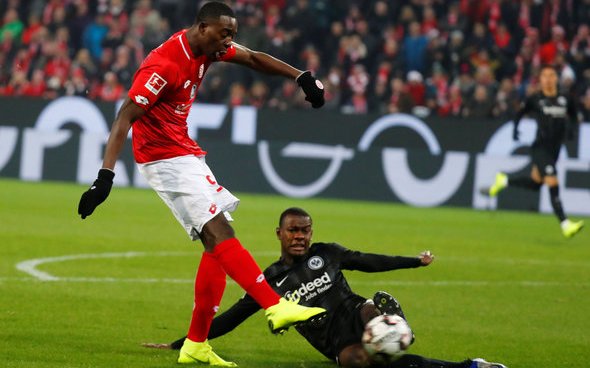 Jean-Philippe Mateta is unlikely to sign for Newcastle United this summer, according to Goal journalist Ronan Murphy.

The reporter, who writes about the Bundesliga, claimed via his personal Twitter account on Monday morning that Mateta, 22, has recently signed a new deal at Mainz, which would mean that Newcastle would struggle to sign the Frenchman if they turn their attention to him.

Sky Sports journalist Kaveh Solhekol reported on Sky Sports News on Friday night [07:50pm] that Mateta’s representatives have been in touch with him to say that Newcastle are trying to sign their client, who scored 14 goals in 34 Bundesliga appearances last season.

I don’t think there’s much there. He signed a new contract recently.

If Newcastle do miss out on Joelinton then they’ll have to cross Mateta off their shortlist of potential replacements for the Brazilian, who is yet to be announced as a Magpies player despite a fee reportedly being agreed almost a week ago [Kicker]. Joelinton reportedly missed a pre-season friendly for Hoffenheim last week and there were even reports that he was set to undergo a medical with the Tyneside club. However nothing has been confirmed by Newcastle yet and on Sky Sports News on Friday, they were talking about potential back-up plans if they do fail to land Joelinton. Mateta would have been a superb signing for Newcastle – perhaps even better than Joelinton. He scored more goals than the Brazilian in the Bundesliga last term, but his contract situation at Mainz would no doubt make a deal tough to complete. Mateta might cost more than Joelinton and at the end of the day, it’s all about money when it comes to Mike Ashley.