Newcastle United were resigned to a third round replay in the FA Cup after they drew 1-1 with Blackburn Rovers on Saturday afternoon.

Matt Ritchie rescued the replay for the Magpies after Bradley Dack put the visitors ahead at St James’ Park, and Rafa Benitez is no doubt considering making some changes to the side to take on Chelsea this weekend.

The Spaniard made eight changes to the side that lost to Manchester United previously, with the likes of goalkeeper Freddie Woodman coming into the starting XI.

Benitez must rotate his squad once again in order to give his side the best possible chance of getting a decent result against the Blues, with seven changes needing to be made.

In goal, despite his good run out against Blackburn, Woodman must be dropped in order for regular number one Martin Dubravka to replace him in between the sticks.

In terms of the defence, the second change must come in the shape of Jamie Sterry, who must be axed at left-back in order to accommodate the excellent Paul Dummett, who was dropped from the entire matchday squad to take on their Championship opponents.

The third change must also come in the defence, with make-shift right-back Javier Manquillo making way for the familiar face of DeAndre Yedlin, who made the bench for Saturday’s clash.

However, Florian Lejeune should not be dropped from the starting XI on this occasion – the way he performed upon his comeback from injury was incredible, meaning he does not deserve to be axed straight away by Benitez, which means Jamaal Lascelles will have to miss out this week.

In terms of the midfield, Jacob Murphy is not up to scratch for this match, so he must be replaced by Christian Atsu, who has been decent for the Magpies in recent times.

Jonjo Shelvey must be the fifth change to the side that drew with Blackburn after his cameo appearance in the 57th minute – an alteration which means that Sean Longstaff will have to drop out of the side.

Kenedy – who is on £25,000-a-week [Spotrac] – needs to be axed from the starting XI after a very poor season, a change which means that Yoshinori Muto will come into the side in order to improve the side’s attacking prowess.

Finally, Salomon Rondon must come back into the side without a doubt – his replacement for Saturday, Joselu, was not effective in the slightest at the weekend and this needs to be rectified immediately with the inclusion of the Venezuelan attacker.

If Benitez makes the right calls regarding the starting XI on Saturday, then his team would be able to stun Chelsea at Stamford Bridge. 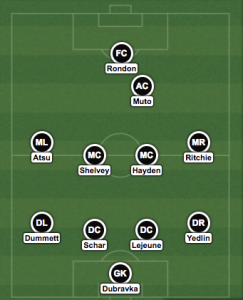