Newcastle United won two games on the bounce ahead of the international break and can easily make it three league wins in a row against Burnley on Monday night.

The Magpies overcame Watford before defeating Bournemouth 2-1 and with the right team selection Rafa Benitez can get three points for his side when they travel to Turf Moor in their next outing.

The Spanish manager’s defence served him well against the Cherries, including goalkeeper Martin Dubravka, and he needs to make only one enforced change in that area.

Magpies left-back Paul Dummett has been ruled out of Monday’s clash, as cited by the Chronicle, after suffering an injury while on international duty with Wales.

Benitez should snub the obvious option of replacing Dummett with 24-year-old full-back Javier Manquillo and instead play Ciaran Clark on the left-flank of his defence.

The 29-year-old may have struggled in that position against Nottingham Forest earlier in the season but the experienced defender will likely do better than Manquillo as Clark has at least impressed on more than one occasion in the Premier League unlike the Spaniard.

Benitez should then keep Kenedy, Ki Sung- Yueng and Matt Ritchie all in his starting line-up after they did well, but drop Mohamed Diame in favour of Jonjo Shelvey.

The creative midfielder has a chance of being fit for Monday’s clash as he faces a late fitness test ahead of the game (Source: BBC Sport) and his potential link-up with Ki would provide the magic the Magpies need to win.

Benitez should also risk playing Yoshinori Muto in place of Ayoze Perez if the Japanese attacker passes the late fitness test he is also poised to take (Source: BBC Sport) ahead of the trip to Burnley.

Muto is a potential livewire for Benitez’s side and he can easily produce the spark that sees the Magpies able to break down Burnley’s defence in order to get another win on the board.

The Spanish manager has to keep Salomon Rondon leading the line as after two impressive displays, the Venezuelan forward seems to have got his Magpies career heading in the right direction. 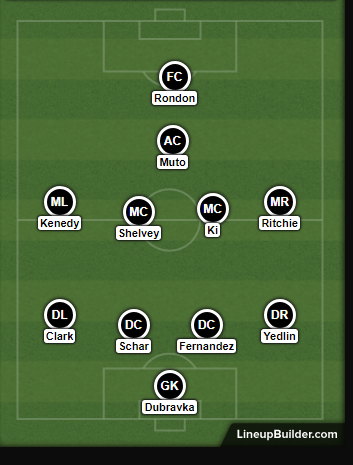 So if Benitez unleashes Muto as well as snubs the idea of playing Manquillo then this XI will keep the Magpies’ winning streak alive upon facing the Clarets.