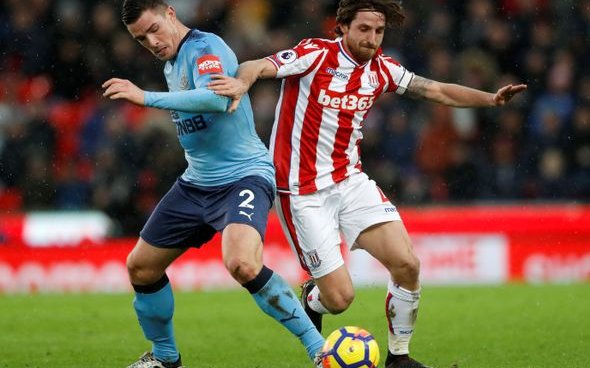 Newcastle United are arguably looking a little light on numbers in the midfield despite the signing of Ki-Sung Yeung from Swansea City.

Currently, the only senior central midfield options apart from Sung-Yeung is Jonjo Shelvey and Mohamed Diame, with the future of Isaac Hayden still remaining unclear after revealing he hoped to seal a move away from St James’ Park.

Shelvey has been excellent for United recently, but adding a player to the ranks to partner him in the middle of the park is just what they need to propel themselves to the next level.

Earlier this summer, the Magpies were linked to Stoke City’s Joe Allen according to the Chronicle – and he is an option that they must consider to play alongside Shelvey despite reportedly passing on the opportunity to sign him.

Creatively, Newcastle were hugely reliant on Shelvey’s vision and ability to produce accurate passes in the last campaign, but with the addition of the 5’5″ (source: Transfermarkt) passmaster, then the burden would not fall solely onto the shoulders of the current Magpies maestro.

If the Toon are to repeat their impressive achievement of finishing in tenth place upon their return to the Premier League, they need a player with Allen’s experience to bolster their ranks.

His experience in the top-flight with Liverpool would prove invaluable to boss Rafa Benitez, as well as to Shelvey – he is a versatile player who can operate in attack but will fall back and provide defensive cover if necessary.

A player of his quality and calibre does not deserve to be playing in the Championship with Stoke City, and a move to Newcastle is just what he needs to prove that he is still an effective midfield player who is capable of playing in the top-flight.

United must swoop for the Welshman to alleviate the pressure on fan favourite Shelvey, and help propel themselves to the next level – an ambitious push for Europe.