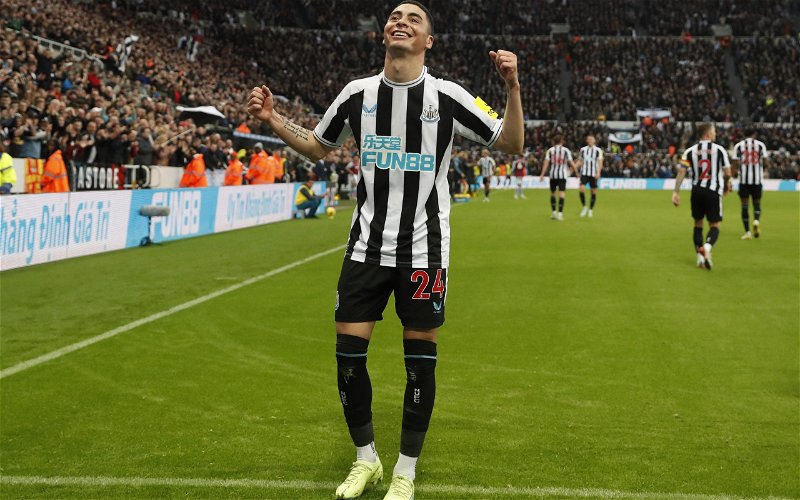 Newcastle United have been tipped to open contract talks with Miguel Almiron “soon”.

Like Joelinton before him, Almiron has morphed into a leading Premier League player under Eddie Howe’s watch. Revitalised under new management, the 28-year-old trails only Ivan Toney, Aleksandar Mitrovic, Harry Kane and Erling Haaland for goals this season, emerging as a prolific option at long last.

A hugely popular figure amongst sections of the support even before his purple patch for an intense work rate, the former Atlanta United star is currently on a contract due to expire in the summer of 2024.

Previously, his agent has been rather public in suggesting the likes of Atletico Madrid were keen on a move for the player, and his recent run will surely have done little to quell any such interest.

Still, this is a different Newcastle now. In contention to qualify for next season’s Champions League, they are in a position to both keep and reward their star players, with the club eager to thrash out improved terms for Bruno Guimaraes.

There have been reports from the Daily Telegraph claiming Newcastle were ready for similar talks with Almiron, though Howe has played that down at this stage. Robinson, however, has tipped them to happen soon.

What has been said about Almiron’s Newcastle contract?

Speaking to Football Insider, pundit Robinson said: “He has been outstanding.

“He will have 18 months left on his deal come the January transfer window so I am sure there are planning talks over a new one soon.

“His ability has never been in question but now he is adding goals to his game. He has the confidence now to cause teams real problems.” 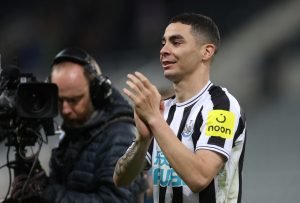 On current form, it’s hard to see how they couldn’t.

Even if more players arrive in January (James Maddison and Moussa Diaby have been linked), Almiron has proven to be an excellent option under Howe and the club are under little pressure to sell.

While it’s perhaps unreasonable to expect the forward to keep scoring at this rate, Almiron is able to operate in a number of positions and the prospect of selling him at his peak is somewhat gutting after such a long wait to see an improvement in his end product.

In years gone by, it might have made financial sense to sell him. These days, however, things are different.