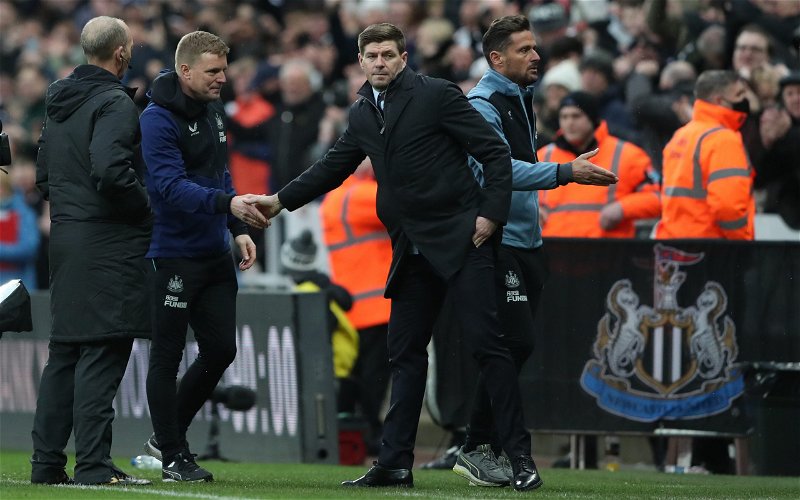 Gerrard, who reportedly rejected Newcastle when Rafa Benitez left the club, was sacked after Villa’s 3-0 defeat away at Fulham on Thursday night.

The former Liverpool icon has found life difficult since leaving Rangers but was touted as a potential option on Tyneside again following the club’s takeover.

There were calls for Newcastle to move for Gerrard, who had just presided over a League title win in Glasgow, though the club ended up moving for first Unai Emery and then Howe.

While there were reservations as to whether or not Howe was the right man to come into a relegation scrap at the time, the appointment has proven a masterstroke.

What did Howe say of Gerrard?

Speaking ahead of Sunday’s trip to Tottenham, Howe said (via the BBC): “Very disappointed for Stevie. I think he is a very good manager and I think it shows the short-term nature of everyone’s thinking and reactions.

“We are in a very difficult job and a very volatile job at times, with a lot of short term opinions and reactions. I have no doubt in his quality and I am sure he will be back very soon.

“I think it keeps you very grounded both in good moments and in bad moments.”

Did Newcastle dodge a bullet?

It would certainly seem to be the case.

While Gerrard did see big summer signing Diego Carlos – a player Newcastle were keen on – ruled out through injury only a short time into his Aston Villa career, the 42-year-old failed to impress in the Midlands.

In charge of Villa for 40 games, they yielded only 13 victories, equating to a win percentage of 32.5%, lower than Gary Neville‘s during his ill-fated time at Valencia.

Criticised for his handling of Tyrone Mings after publicly stripping the England defender of the captaincy, that style of man-management would surely not have gone down well in a Newcastle camp fighting relegation at the time Gerrard was linked.