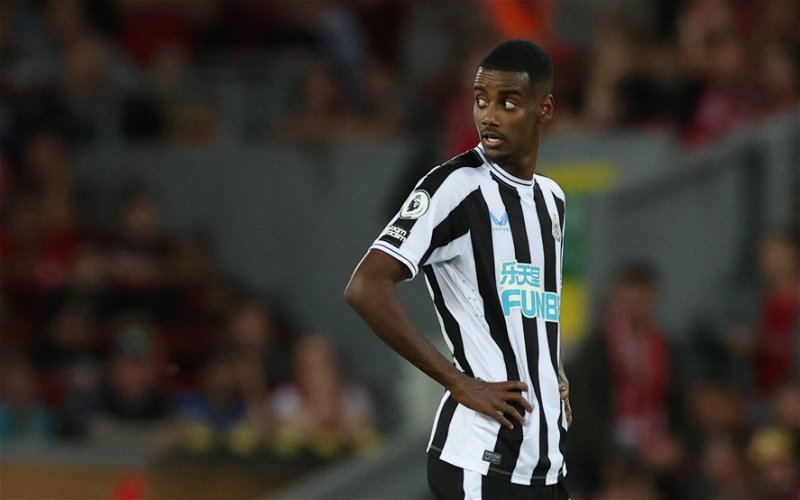 Alexander Isak says the last few days have been “hectic” at Newcastle United and believes a siege mentality gives the team “energy”.

Isak is expected to make his home debut on Saturday against Crystal Palace after marking his initial bow with a brilliant goal away at Liverpool on Wednesday night.

Having arrived for a club-record £60m, the pressure was on the 22-year-old to convince. Clearly, these are early days, but the manner in which the former Real Sociedad striker took a brilliant second goal offered another indication of his quality, albeit it did not count following a marginal offside call.

Eddie Howe is hopeful the Sweden international will be able to play against Palace despite suffering a dead leg at Anfield and Isak reflected on his start at Newcastle during an interview with the club’s in-house media channel posted on YouTube.

What has Isak said about the opening stages of his Newcastle career?

Asked to describe the first few days of his time at the club, Isak said: “Yeah, it’s been quite hectic the last few days, but fun as well.

“It was a big move for me and the yeah with the work permit, it was a bit of a shame I wasn’t able to play that first game.

“But happy to have made my debut and score my first goal.”

When asked of the feeling towards Newcastle – following Liverpool fans booing the team off and Howe admitting domestic clubs offered little help in the transfer window – Isak said: “I’ve been here a really short time but yeah you can see that the squad is really fierce and, that people think like that, I think it gives us energy.

A late, late winner = the first Klopp fist pumps of the season 😁 pic.twitter.com/An95bDrmKP

“I think we can use that to our advantage.”

What has Howe said of Isak?

Speaking ahead of the Palace game, Howe said: “The players have taken to him. He’s quite quiet and he’s going about his business in a professional way – he’s very focused. He’s asking questions about how we want to play and what’s required of him – he’s been excellent.

“I think that showed in his performance on Wednesday. It was one of really good tactical understanding in a very short time he delivered what we wanted him to do. He showed his ability and the second goal that wasn’t given especially was incredible.”
Give us feedback