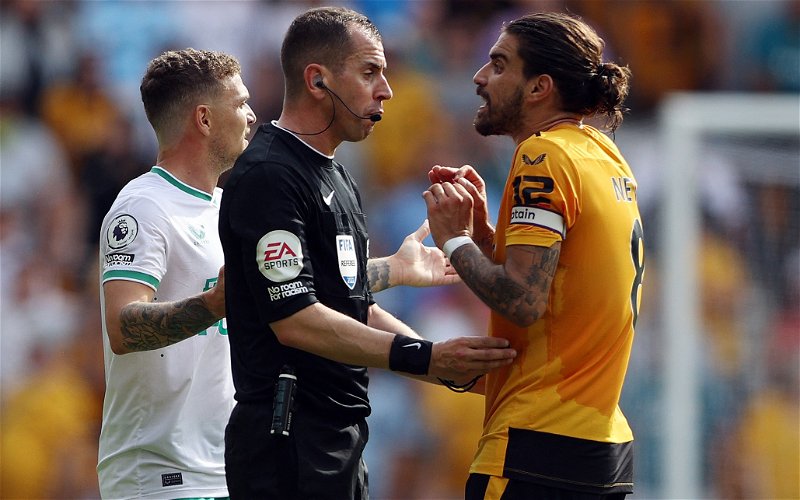 A late wonderstrike from Allan Saint-Maximin saw Eddie Howe’s side maintain their unbeaten start to the Premier League campaign, with the Frenchman coming up trumps in the dying embers of the game following a difficult afternoon.

While Wolves will be disappointed to have conceded so late on (and almost again when Elliot Anderson hit the bar during extra-time), a point is probably a fair reflection. For only the third time since the start of the 2016/17 season, Newcastle had more than 20 shots in a game (via Squawka), while they also bossed the possession, dominating with 63.9%.

Clearly, that doesn’t the whole story. Wolves were dangerous on the counter and had a goal ruled out (they might have good reason to feel aggrieved, but United could have easily been afforded a penalty in the first-half when Sean Longstaff was pulled back in the box), while Newcastle struggled to make many opportunities in the absence of key players. All in all, a point seems fair.

One particular flashpoint came in the 47th minute, when Schar tackled Pedro Neto. After swiping at a clearance, the Swiss defender reacted rashly and appeared to stamp on Neto as he attempted to rectify his mistake.

Schar was booked and VAR did look at a potential red, although no more punishment was inflicted.

What did Neves say about the challenge?

Neves, who opened the scoring with a stunning strike of his own, said he was shocked Schar was not given his marching orders and revealed he spoke with the Swiss.

“Everyone saw it – I truly can’t believe, I saw the images already when I went to the dressing room because Neto’s leg was scratched from leg to ankle – he was really lucky to be fit after that challenge,” he told Match of the Day (via BBC Sport’s LIVE blog at 16:16).

“Like I said to the ref, there is no chance of him to not go to the screen and watch the images because he almost broke the leg – I spoke to Schar as well, he said it was not on purpose, of course it was not, but when it is so dangerous, someone needs to see it.

“On our second goal, Neto just put his body in front of the defender, on that tackle there is no excuse for the Newcastle player to be still on the pitch, it was really, really dangerous.”