European football expert Andy Brassell has backed Thorgan Hazard to be a success should he move to Newcastle United.

With Eddie Howe keen to strengthen his attacking options during what remains of this summer’s transfer window, plenty of names have been linked.

A loan bid for Armando Broja was rejected by Chelsea while Everton are not keen to sell Anthony Gordon despite Newcastle’s interest. Elsewhere, the valuations Real Sociedad and Bayer Leverkusen have of Alexander Isak and Moussa Diaby are said to be too high for the club to consider.

Hazard, who has reportedly been told he can leave Borussia Dortmund, was touted as a target by German publication BILD last month.

What has been said about Hazard and Newcastle?

Speaking on Friday’s Football Ramble On the Continent Podcast, Brassell said (15:15): “Thorgan Hazard is an interesting one.

“I think people know he’s got a lot of ability. Maybe’s not going to be a leading player at an elite club but when you look at, say, the Newcastle United link, he is a player who I think would be absolutely great for them and affordable.”

Would Hazard be a good signing for Newcastle?

Able to operate across the frontline and up for sale, Hazard would look a tempting option for the club. 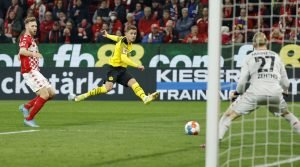 The 29-year-old proved hugely impressive after leaving Chelsea for first Zulte Waregem and latter Borussia Monchengladbach. Just under 200 appearances for the latter yielded 46 goals and 44 assists, earning him a move back to one of Europe’s elite clubs.

In 2021, the Bundesliga’s official website talked of his importance amid one of the “league’s most frightening attacks”, although it’d be fair to say things have stalled for Hazard.

Where the Belgium star – brother of Real Madrid star Eden Hazard – registered 17 goals and 23 assists between 2018 and 2020, those figures stand at five and four in the period since, albeit he had lost his staring role.

Still, with their leading targets looking out of reach, Hazard might be one to consider.

Seemingly cheaper than Diaby or Isak and with a proven track-record, Hazard may not be quite as exciting as he once was, although that does not mean he’d be a bad signing.