Leeds United manager Jesse Marsch claims the club do not intend to sell Jack Harrison but did confirm transfer interest in the player.

With Newcastle reportedly pulling out of deals for Alexander Isak and Moussa Diaby, attentions must turn to other targets. Everton’s Anthony Gordon remains of interest, although there is a feeling the Goodison Park club will not risk a fan backlash by selling one of their most popular players.

The club had also made a loan bid for Chelsea’s Armando Broja, though that was rejected even before Thomas Tuchel ruled out an exit for the 20-year-old.

Harrison, meanwhile, has frequently been touted as a potential target.

Both the Daily Mail and the Daily Telegraph have suggested Eddie Howe is keen on the 25-year-old, who first joined Leeds on loan from Manchester City in 2018 and played a huge role in their promotion to the Premier League.

What did Marsch say about Harrison?

Speaking during the club’s pre-season tour in Australia, the American said (via Leeds Live): “There has always been interest in Jack, like many of our players, but I know Jack is also very happy here and that he’s done a really good job, that he’s a big part of what we’re doing.

“Of course, there’s always possibilities big transfer offers come in and then clubs have to decide how it fits and what are the best options moving forward, but for me, Jack Harrison is a big part of our plans moving forward. We’re counting on him this season for sure.”

Would Harrison be a good signing for Newcastle?

On the face of it, Harrison might not be quite as exciting a name as Isak or Diaby.

Still, that is solely a matter of optics. The fact is, the former New York City youngster has scored 16 goals and 9 assists in 71 Premier League appearances in a Leeds team not exactly blessed with too much quality.

Their first season in the top tier was a success but much of that looked down to the system created by Marcelo Bielsa, one that went off the rails last time out as the Argentine was sacked.

Allan Saint-Maximin has only ever registered 11 goals and 14 assists in 86 League appearances for Newcastle. Miguel Almiron has just 9 goals and 3 assists in 110 outings, while Ryan Fraser – despite an improvement under Howe – has only contributed 3 and 6 respectively in 51 games. 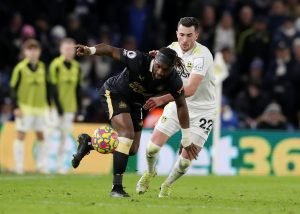 Frankly, it wouldn’t be hard to improve on the end product of Newcastle’s wingers. At 25 and able to operate across a number of positions, Harrison averaged more in the way of key passes (1.2, via WhoScored) than both Almiron and Fraser last season, as well as shots over the same period (1.2).

The season before, none of the three Newcastle players could match the Leeds star for shots (1.3), key passes (1.6) or even tackles (1.8) per game.

A student of Bielsa’s intense pressing system, FBREF data notes Harrison ranks within the leading 79% of wingers playing across Europe’s big five leagues over the past year for pressing actions (20.46), tackles, interceptions (1.4), blocks (1.81) and clearances (1.6) over the same period.

Former teammate David Villa said of Harrison (via Goal in 2016): “I’ve spent a lot of years in this game, and he has something important that only a few players have.

“When he has the ball at his feet, you get the sensation something is going to happen.”

Experienced in the Premier League and young enough to develop under Howe, Newcastle could certainly do a lot worse than Harrison.