Armando Broja is keen on a permanent move to West Ham should he leave Chelsea this summer, sources have told Nothing But Newcastle.

The subject of a loan bid from Newcastle, Chelsea are still deciding what to do with the Albania international.

Everton and Southampton – the club Broja played for on loan last season – are also believed to be in the mix, with Thomas Tuchel previously indicating the forward would get a chance to prove himself during Chelsea’s pre-season schedule.

Still, the arrival of Raheem Sterling will make competition for places even more intense at Stamford Bridge and the west London giants have certainly set a precedent in selling their academy graduates but including buy-back clauses.

For his part, the 20-year-old would prefer a permanent move away if he is not afforded a chance by Tuchel.

Where do Newcastle stand in the race?

Last month, NBN also brought you the news that West Ham were confident of landing a £30m deal for the striker. 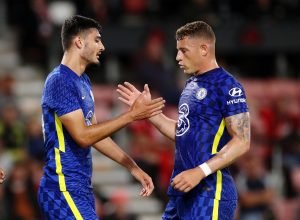 According to the Evening Standard, David Moyes’ side are set to step-up their interest in Broja this week and have planned fresh talks as they weigh up whether or not to make a formal offer.

Everton, under the stewardship of Chelsea legend Frank Lampard (the man who handed Broja his senior debut), have also reportedly declared their interest.

Taking to Twitter on Monday, The Daily Telegraph’s Luke Edwards wrote: “Nufc will have to start cranking things up again now.

“They are well aware they probably need two attacking players before close of window and ideally before start of the season. The main problem to address this summer was offence. Howe said that himself.”