Newcastle United continue their pre-season schedule with a game against 1860 Munich while away in Austria.

Eddie Howe’s squad have been put through their paces in central Europe over the past few days after beating Gateshead before their trip, with the club’s international contingent now back in full training.

Obviously, not a huge amount can be taken from pre-season games but its going to be hugely exciting to see Bruno Guimaraes, Sven Botman, Kieran Trippier, Callum Wilson and Allan Saint-Maximin play together, even in a non-competitive context.

With Wilson and Trippier injured for much of the end of last season, Howe rarely got to use his best players even before Botman’s arrival. Going forward, it’s going to be fascinating to see how they all fit in together.

Where to watch 1860 Munich vs Newcastle United

TV channel and live stream: The friendly will be broadcast on both Newcastle’s official YouTube channel and the club’s website.

Javier Manquillo was the only player who could consider himself in with a chance of fairly regular first-team football left behind for the trip as he nurses an injury. 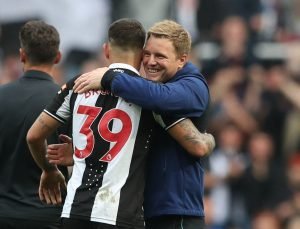 Botman could make his debut in some capacity while Guimaraes may be handed a run-out after his international involvement.

Obviously, it’s important not to put too much stock in pre-season games, but Newcastle will surely fancy their chances of beating a German third-tier side.

Having put five past Gateshead, the attacking line should fill their boots.