Miguel Almiron: Newcastle star happy at ‘the best club in the world’ despite transfer links

Miguel Almiron will not be leaving Newcastle United this summer, claims the player’s agent.

With Newcastle needing to create space in their squad this summer, Almiron had been tipped as a potentially sellable asset.

Indeed, the likes of Everton and Fulham were credited with an interest in the 28-year-old, who struggled for regular action when Ryan Fraser was fit.

Into the final two years of his contract (which SpotRac claim to be worth in the region of £42k-per-week), this summer did appear to represent a natural time to sell the Paraguayan international, particularly with the likes of Moussa Diaby targeted as a potential upgrade.

What has been said about Almiron’s Newcastle future?

Daniel Campos, however, has claimed his client is happy on Tyneside, hailing Newcastle as “the best club in the world”.

Speaking to Universo 97 (via La Nacion) he said: “He is at the best club in the world. He is happy with prominence; I don’t see any possibility of change now. 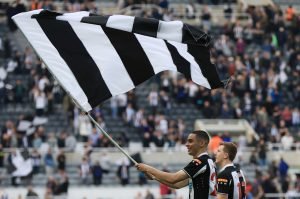 Is Almiron staying at Newcastle a good thing?

While it can never be a bad thing as such to have Almiron in the squad, it does potentially close one door in trying to help raise the transfer budget.

The funds afforded to Eddie Howe this summer are believed to be with the thought that player sales would help supplement them, all while clearing some valuable space in the squad. One of Dan Ashworth’s early tasks as sporting director is said to be trying to speed up that process.

Clearly, Almiron has his uses, as his Goal of the Season contender against Crystal Palace proved. Even beyond that, the former Atlanta United star ranked in the top three in the Newcastle squad for pressing actions made last season (432, via FBREF).

Capable of playing as a No.10 as well as a winger, his performances towards the end of the season had Howe purring.

The fact is, however, Newcastle need to make space in the squad and there are not too many others players who the club could feasibly sell for a decent fee without having a massive impact on first-team proceedings.