Preston North End have opened talks with Newcastle United over a potential permanent deal for Freddie Woodman, according to Football Insider.

Earlier this month, The Athletic revealed the 25-year-old could be up for sale now he is into the final year of his contract.

Tipped to be a future No.1, Woodman joined Bournemouth on loan in January but his struggles continued and he failed to make a Championship appearance as Scott Parker’s side won promotion to the Premier League.

Now, Preston are reportedly prepared to offer him an escape route and talks have been opened with Newcastle.

While the idea of him eventually claiming a regular starting berth was a promising one during his younger days, Woodman’s performance in the Premier League at the start of this season was disappointing.

At fault for Cristiano Ronaldo’s first goal in a 4-1 loss to Manchester United in September, Woodman was one of the worst-performing ‘keepers in the division in terms of post-shot expected goals.

That metric judges how likely a goalkeeper is to save a shot based on the quality of the chance for the attacker, with positive numbers indicating an above-average ability to prevent goals. Negative numbers meanwhile, suggest the ‘keeper should have done better and was beaten too easily. 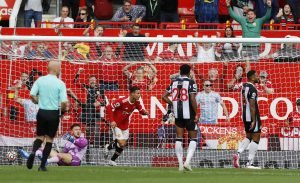 Obviously, it’s hard to be too critical of a player thrust into a team struggling towards the bottom of the division and perhaps Woodman would improve with time.

Still, with Newcastle needing to sell and create space in the squad this summer, any interest should be acted upon. Indeed, one of Dan Ashworth’s early tasks is thought to be trying to speed up the manner in which the club shift their deadwood, with Isaac Hayden already joining Norwich City on loan.

If the chance to sell Woodman is there, it must be taken.

What has Eddie Howe said about Freddie Woodman?

“He’s an outstanding young goalkeeper,” he said (via The Northern Echo).

“We’ll be sitting down with Freddie to discuss what his next step is. But at this moment in time, it’s difficult to say.”