Newcastle United are aware of Allan Saint-Maximin’s frustrations in regards to wages, according to The Daily Mail.

Saint-Maximin is reportedly under consideration by both Chelsea and Tottenham as they plot attacking signings this summer.

The player himself is understood to have had his head turned by the idea of a higher salary elsewhere, despite only signing a contract extension at St James’ Park in October 2020.

Having overseen a frustrating summer window thus far with deals for Hugo Ekitkie and Sven Botman proving difficult to get over the line, there is thought to be a feeling behind the scenes on Tyneside that the 25-year-old may have to be sold.

Still, the £40m valuation Newcastle have placed on him could prove prohibitive.

How much does Saint-Maximin earn at Newcastle?

Upon signing his new deal almost two years ago now, The Daily Mail claimed the Frenchman had moved into the highest bracket of earners at St James’ Park.

In a Premier League context, that is reasonably low when looking at the leading teams. According to SpotRac data, there are 14 players at Chelsea earning over the £100k-per-week bracket alone. 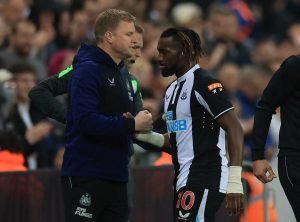 During the January transfer window, Eddie Howe was understood to have wanted to keep the wage structure in tact despite the eye-catching additions of Kieran Trippier and Bruno Guimaraes. Given Saint-Maximin struggled at times under his watch, the prospect of a new deal so soon after signing his last one seems somewhat unlikely.

While much was made about some of his performances towards the back end of last season, his importance to the cause across the whole campaign cannot be questioned.

No one contributed to more goals (5 goals, 5 assists) while no player to have started a game amassed more shot-creating actions per game (3.66, via FBREF).

A hugely exciting talent to watch at times, the idea of Howe working with Saint-Maximin across a whole pre-season in order to better integrate him into the team is a mouth-watering one.

Should he desperately want to leave, however, that could change things. There is no suggestion he’s kicking up a fuss but part of what made the end to last season so thrilling was the fact there was a huge connection between owners, players and supporters on Tyneside for the first time in years.

If Saint-Maximin does not want to be a part of that, perhaps it would be best to consider a sale, but only on the club’s terms.