Dan Ashworth has met with Newcastle United Academy manager Steve Harper as he begins a review of the club’s youth system, according to The Chronicle.

While one of Ashworth’s early tasks now he is finally in place as the first sporting director of the PIF era is reportedly working on trying to shift players out of the club, the 51-year-old will be expected to work closely with the youth set-up in order to create a better pathway from there into the first-team.

With an eye on ensuring long-term success, a review is said to be underway after a miserable season at U18 level, with Peter Ramage’s side finishing bottom of the Northern Division.

Things were slightly better for the U23 side, though their eighth-placed finish in Premier League 2 Division 2 was not exactly inspiring.

Indeed, the clubs Newcastle want to be competing with at the top of English football all had teams performing well in Premier League 2 Division 1, with Manchester City, Arsenal and Liverpool all finishing in the top four.

Why do Newcastle need to improve their academy?

The North East is often heralded as a hotbed for football, yet Newcastle rarely see the benefits of it in their first-team.

Matty Longstaff was the last player to emerge from the academy and make it into the starting XI but the midfielder has since struggled and finished last season on loan at Mansfield Town. Brother Sean and long-time servant Paul Dummett are other representatives, though both have found consistent game-time hard t.o come by.

There is hope for Elliot Anderson, however, after he impressed on loan at Bristol Rovers. 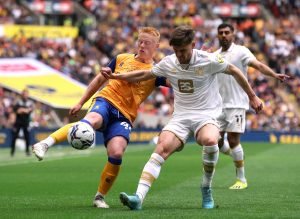 Part of the reason the elder of the Longstaff clan and Dummett saw their deals extended recently was thought to be because of their connection to the roots of the club. Ahead of an era in which Newcastle have the kind of resources they could only have dreamed about in years gone by, having those youth products performing well does add an extra layer of authenticity.

According to The Athletic, Ashworth’s specialty lies in “nurturing talent from the academy, clearing pathways and helping players develop — often with loan spells — so they can be given their chance”.

Given his prominent role in creating the “England DNA” – fostering a harmonious and collective view of playing style and principles across all age groups –  which has served the national team so well in recent years, Ashworth’s involvement has to be considered exciting.

What has been said of Newcastle’s academy plans?

Speaking to The Guardian in October, director Amanda Staveley talked of the desire to see “local lads” playing for the first-team during an exciting new era.

“To reach the top of the Premier League you don’t just need great players, you need robust, strong foundations – and we have to build them. You need a strong academy, we want to see lots of local lads playing here, that’s huge for us.”