While the idea of newly wealthy Newcastle United signing players on loan from Aston Villa just months after their Saudi Arabian takeover was laughed at by some outsiders, Targett has proven hugely impressive.

The former Southampton defender, alongside Dan Burn and Kieran Trippier, helped transform a Newcastle defence to have been labeled as of a “Championship” standard by Jamie Carragher in October. Indeed, Targett was only on the losing side in five of his 16 games clad in black and white, with his underlying numbers proving hugely impressive.

How well has Targett played for Newcastle?

According to WhoScored data, only Matt Ritchie (expected to depart) and star man Allan Saint-Maximin provided more in the way of key passes per game than Targett’s 1.2 while only Bruno Guimaraes and Trippier contributed more tackles than his 2.6 over the same period. 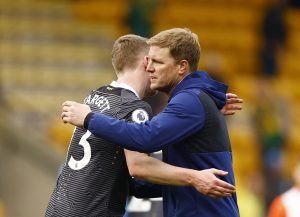 For years, the left-back department has been a problem, particularly with Jamal Lewis failing to impress. While Renan Lodi has been linked with a move to St James’ Park, the fact Lewis has struggled and Ritchie will likely leave would suggest there’s room for two left-backs to come into the squad next season.

In March, The Daily Mail claimed a permanent deal could be done for around £15m.

What has Howe said about Targett?

Speaking after Sunday’s win at Burnley, Eddie Howe said (via The Shields Gazette): “I think it’s difficult one to give you any direction on that in respect to his club.