Newcastle transfer news: Up to 10 players could be sold amid FFP restrictions

Up to Newcastle United players could be facing an exit this summer, according to The Sun.

After Sunday’s 5-0 loss away at Manchester City, The Daily Telegraph‘s Luke Edwards revealed that “most” of the club’s starting lineup would “survive” the first summer window under PIF ownership.

Still, there’s little doubt Newcastle have far too big a squad as thing stand. With five players joining during the January transfer window, Eddie Howe already had to leave out the likes of Ciaran Clark, Jamal Lewis and Isaac Hayden of his 25-man Premier League squad, a situation that simply cannot go on.

While major changes to the starting XI don’t look likely given the reports of FFP restrictions, it seems there will be somewhat of a cull when it comes to ridding of squad players, which should hopefully raise further funds.

Who could leave Newcastle this summer?

Clark, Hayden, Lewis are all mentioned within the report, along with Dwight Gayle (supposedly out of contract anyway), Matt Ritchie and Karl Darlow.

It’s hard to imagine any of those leaving would have too big an impact but the report does mention some slightly bigger names too. Indeed, the club are reportedly willing to listen to offers for captain Jamaal Lascelles, as well as Javier Manquillo and Miguel Almiron. 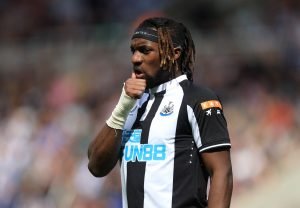 Allan Saint-Maximin is another, although it is said Newcastle might struggle to find a buyer willing to pay around £40m.

While there’s certainly an argument to keep those kind of names at St James’ Park, they are the kind of players the club could sell to raise funds.

What has Howe said about players leaving?

Speaking after the 5-0 loss at the Etihad Stadium, Howe said: “Players that you love and have a great relationship with, they sometimes have to leave for the benefit of the team.

“I’m sure there’ll be players that will move on, who have represented the club in a brilliant way.”