Jamaal Lascelles’ Newcastle United career could be over as the club chase a new centre-back in the summer transfer window, according to Sky Sports.

Although Dan Burn arrived in January and has since hit the ground running, Newcastle are expected to sign a new central defender.

January target Diego Carlos has joined Aston Villa while another who featured high up on the club’s transfer wish-list in Sven Botman is reportedly attracting interest from Italian champions, AC Milan. That’s not to say the chase for Botman is over, although clearly it’s a fairly complicated situation.

Newcastle, however, will still likely target options of that ilk. Quite who they are remains to be seen given both play for big European clubs, but it could spell bad news for Lascelles..

Following Burn’s arrival and the rebirth of Fabian Schar, the club captain had dropped out of the starting lineup as Newcastle stormed up the Premier League, although an injury to the Swiss did afford him four starts in the final nine games of the season.

What does the future hold for Lascelles?

Given a new centre-back may arrive and Newcastle needing to sell to raise further funds, it seems logical to allow Lascelles to leave.

Eddie Howe has spoken about “well loved” players needing to leave for the club to grow and although the skipper endured a poor start to the campaign just gone, few would doubt his overall impact during a difficult period for the club.

It was he who emerged as a leader under Rafa Benitez during 2016’s miserable relegation, becoming captain and helping the team return to the top-flight at the first time of asking.

Things, however, must move on and after 214 appearances in black and white, Lascelles can be proud of his Newcastle career. 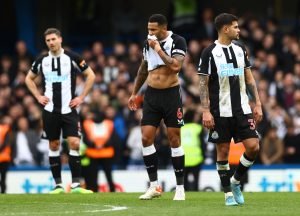 With Schar and Burn impressing at the back and a new signing eyed, it’s difficult to see where the 28-year-old would fit in.

What has been said about Lascelles’ Newcastle future?

Speaking to GIVEMESPORT earlier this month, journalist Dean Jones hinted a return to Nottingham Forest could be on the cards for Lascelles.

“I think there’s a possibility that he goes to Forest, maybe,” he said.

“I think there will be a few clubs interested in signing him; high Championship, low end Premier League, is probably where he will be looking.”