Newcastle United have an interest in Tottenham star Harry Winks, according to the Evening Standard.

The 10-cap England international is believed to have been put up for sale by Antonio Conte at Tottenham, who are reportedly looking for a fee of around £20m.

Certainly a promising player upon his initial breakthrough for both Spurs and England, former manager Mauricio Pochettino even compared him to Andres Iniesta in 2018.

Still, Winks has since dropped out of the England set-up and it is almost two years since he was selected, while other options have overtaken him at Spurs. Last season, the 26-year-old was afforded only 9 Premier League starts.

Winks would fit the mould of the players Newcastle moved for in January. Experienced in the Premier League with a point to prove after seeing his progress stall, it would have been a pretty logical move at the time.

Still, it’s hard to see where he fits in now. The signing of Bruno Guimaraes and rebirth of Joelinton has strengthened the midfield, while Jonjo Shelvey and Joe Willock have flourished under the stewardship of Eddie Howe. 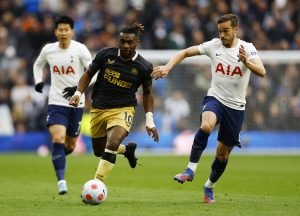 Given the balance with FFP Newcastle have to keep this summer, spending £20m – a sizeable chunk of the apparent transfer budget – on a player who might not even get into the first-team would seem a rather strange decision.

What has been said about Winks and Newcastle?

“Winks could play anywhere in the Premier League,” he said.

“He is a top-quality midfielder and is proven on the international stage.

“He has been frozen out over the last 18 months. His career has come to a bit of a standstill.

“There is no reason why he can’t go somewhere, reinvent himself and get back in the England squad. He is certainly good enough.

“When he has played for Spurs it is difficult because he knows he isn’t going to get a run of games. That is hard as a player. It has just not worked for him this season.

“I think he will join a mid-table Premier League team and play week in, week out. We will see the best of him when he gets a regular run of games.”