Newcastle United will shell out a “decent fee” to Brighton following the news Dan Ashworth will be appointed as the club’s sporting director with immediate effect, according to The Athletic’s Chris Waugh.

Ashworth had emerged as the club’s leading target for the role back in February, though there were officially fears Brighton would play hard ball.

Indeed, The Daily Mail suggested those on the south coast were prepared to keep Newcastle waiting until November, having placed the 51-year-old on gardening leave until a hefty compensation fee was paid. At the time, the reports even suggested that could be as much as £5m, over double what Everton paid Leicester City for Steve Walsh in 2016.

Nothing But Newcastle have also been told by a source close to Brighton that they have little interest in helping Newcastle, such is the ill-feeling towards them following October’s takeover.

While it’s unclear as to how much Newcastle have paid, it is understood to be sizeable.

What will Ashworth’s main job at Newcastle be?

Although many might believe Ashworth is going to be responsible for transfers, that might not completely be the case.

Indeed, back in March The Athletic revealed “signing players was not Ashworth’s primary task” at Brighton. Rather, he was ” the man in the middle of the wheel” who “pointed the whole vehicle in the right direction, had faith in skilled heads of department to make good choices and kept the whole thing turning.”

It seems Newcastle will be splitting responsibility across a number of people, rather than relying on simply one sporting director to make all of the signings, as is the case at leading clubs such as Manchester City and Liverpool.

Given Ashworth’s big role in crafting the “England DNA” to have served the national team so well over the last few years, it seems safe to assume he will also have a part to play in improving the pathway to the first-team from the academy, something the club have struggled with. 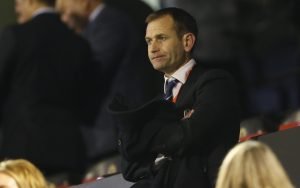 It’s also important to note the club have announced him as a “sporting director”. For more context on that particular role, it seems apt to look at a description of it from the Bundesliga’s official website, given the prominence of such individuals on the continent.

“In Germany, it means duties are split: the coach is responsible for leading, training and picking the team, while the sporting director oversees the whole footballing side. In terms of hierarchy within a club, the sporting director sits between the head coach and the chairman. The person in the higher position has the ability to hire and dismiss any of those below him.”

What have Newcastle said about Ashworth?

A club statement released on Monday read: “Newcastle United are delighted to announce that Dan Ashworth will become the club’s sporting director after an agreement was reached with Brighton & Hove Albion to release him from his current contractual obligations with immediate effect.

“The terms of this agreement will remain confidential between the clubs and are subject to Premier League approval.