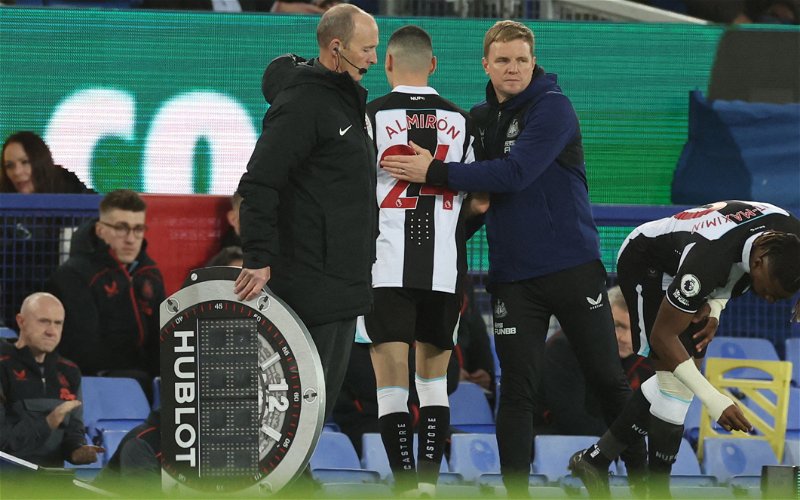 Miguel Almiron is at risk of being sold by Newcastle United this summer as the club plot a major overhaul, according to The Daily Mirror.

Following a recruitment meeting between decision-makers at St James’ Park, a seven-man transfer shortlist is believed to have been prepared.

Every position running through the spine of the team is thought to have been earmarked as an area for improvement, from goalkeeper to centre-forward.

Still, it does seem unlikely the club will act recklessly, with player sales understood to be topping up the summer budget available to Eddie Howe.

Of those, Almiron – reportedly valued at £10m by the club – could be sold.

Would selling Almiron be good business?

Given how little the Paraguayan has been involved under Howe’s stewardship, it is difficult to make a case for him to stay.

Only five times has the 28-year-old started since Steve Bruce was replaced in November and, in a total of 24 appearances across all competitions this season, Almiron is yet to either score or assist.

There may be more to the game and merely those metrics, but it’s not as if the former Atlanta United forward is particularly impressing elsewhere. Granted, his lack of regular action might be a factor, but he ranks 11th for shots per game (0.9 via WhoScored), 11th for key passes over the same period (0.6) and 7th for dribbles too (0.6).

With a contract (which SpotRac claim to be worth in the region of £42k-per-week) running until the summer of 2024, Newcastle would be foolish not to recoup at least some of the money they paid for him while they still can.

Indeed, having arrived for what was then a club-record £21m in January 2019, getting as little as £10m already represents an £11m loss as it is.

What has been said about Miguel Almiron?

Speaking to Football Insider last month, pundit Noel Whelan said: “You’ve got to say, looking in terms of consistency and goals at the end of the season – he hasn’t done enough. The percentages and ratios don’t match.

“That’s why they’ve got the richest owners in the world, to spend big money on the cream of the crop in order to realise their dreams and aspirations at the top of the table.

“They will already be looking and planning ahead of this transfer window now, and unfortunately for Almiron – I can’t see how he fits in next season.”