Newcastle United tried to get ahead of the pack and bring Darwin Nunez to the club in January but his performances since have seen his stock rise higher, according to Luke Edwards.

The Benfica star has been strongly linked with a number of Europe’s leading clubs after a stunning breakthrough campaign with Benfica.

Nunez has scored 33 goals in 38 appearances across all competitions, impressing against Liverpool in the Champions League, and his current club are reportedly willing to sell while his stock is high.

Newcastle are thought to have made a move in January in an attempt to fend off other interest in the player, although the 22-year-old is believed to want to move to a club playing European football.

The pursuit is not thought to be over but it will likely be a difficult sell for a player sure to have plenty of options this summer.

As you say, not over, but Newcastle anticipate lot of competition from clubs who can offer European football. Hoped to get ahead of the pack in January, as they did with Bruno, but Benfica wouldn’t sell and said wait until summer. His performances since have raised stock higher 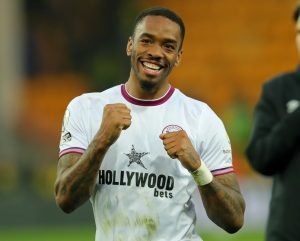 Edwards’ tweet followed up a story in The Daily Telegraph claiming the club could turn their attentions to Brentford forward, Ivan Toney.

The 26-year-old has gone to strength-to-strength since leaving St James’ Park in 2018 and has enjoyed his maiden campaign as a Premier League footballer. In 28 League games, Toney has scored 12 goals with Harry Kane the only English player to have bagged as many this season.

Proven in the Premier League, Toney certainly fits the profile of player Newcastle have targeted during the PIF era thus far and will “almost certainly” leave Brentford this summer according to Edwards.

What could Toney bring to Newcastle?

Clearly, the idea of re-signing a former player who barely impressed – albeit amid a distinct lack of chances – in his first spell isn’t quite as exciting as signing one of Europe’s most prolific young players.

Still, Toney features within the top five players to have won the most aerial duels per game in the Premier League this season (4.4, via WhoScored), suggesting he’s more than capable of leading the line at the top level. Chris Wood leads that particular metric (5.5 over the same period) in the division, so it’s clearly something Eddie Howe rates, and Toney has proven far more prolific.