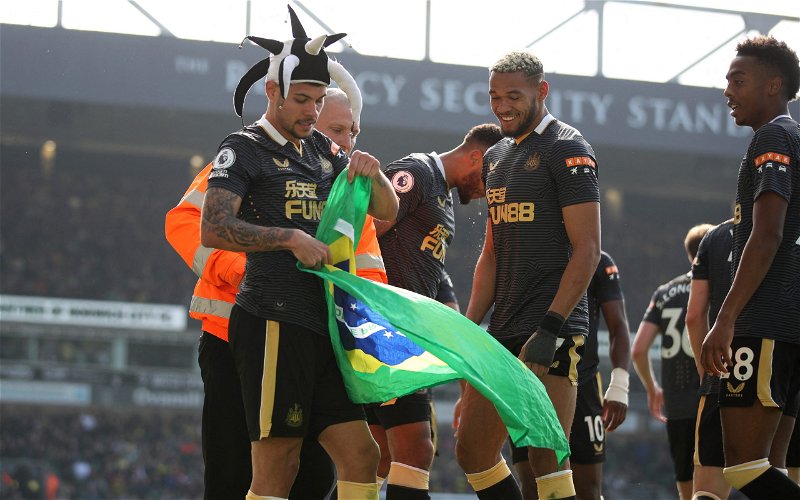 Bruno Guimaraes has been tipped to become a hero at Newcastle United for a “long, long time”.

The Brazilian has had a season-altering impact on the Newcastle team since arriving in January.

Indeed, even a £40m transfer is looking like somewhat of a bargain, with the midfielder scoring four times in 13 appearances. Clearly, the 24-year-old was not brought in to be a goalscorer, although it just another bonus on top of a player already making a huge impact elsewhere.

Guimaraes already ranks within Newcastle’s top five players for shots per game (1.3, via WhoScored), dribbles (1.2) and fouls drawn (2.1). The beating heart of the team in recent weeks, classy finishes against Southampton and Norwich City speak of a player capable of the spectacular.

Has Guimaraes been linked away?

As a result, the transfer rumours have started.

Spanish outlet AS touted Real Madrid with an interest in the player, who also attracted glances from Juventus and Arsenal before moving to St James’ Park.

Still, it’s incredibly difficult to envisage situation in which Guimaraes leaves, particularly anytime soon. Having signed a four-and-a-half-year contract upon his arrival, Newcastle’s newfound wealth means they simply do not have to sell and, obviously, they are building for an exciting future under the PIF ownership.

Guimaraes himself has spoken of his desire to become a “legend” on Tyneside and, certainly, the Brazil international is going the right way about it.

What has been said about Guimaraes’ Newcastle future?

Speaking to Football Insider, pundit Paddy Kenny said: “It’s not hard to be loved up in Newcastle, just try hard and play well.

“By all accounts this guy is unbelievable and he is that calibre of player Newcastle want.

“He seems to love playing up there as well, you can see it in the way he celebrates and how he treats the fans.

“I think they have a new hero up there and I think he will stay there for a long, long time with the project Newcastle have.”