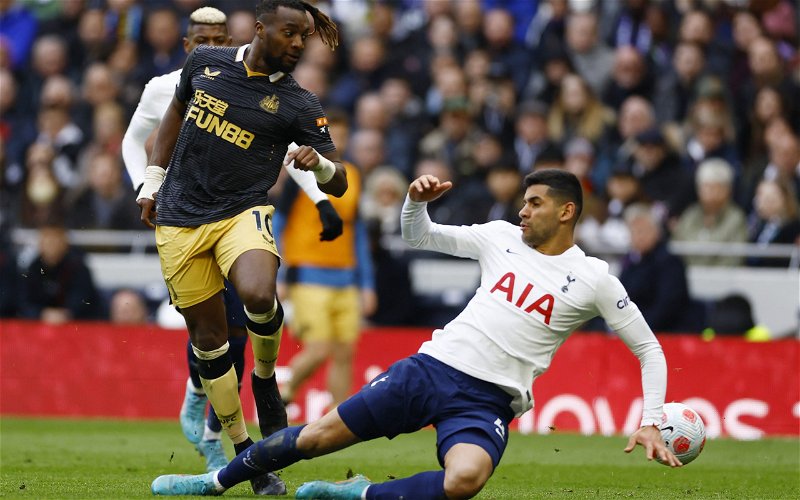 Decision-makers at Newcastle United have concerns about offering Allan Saint-Maximin a new contract, according to 90 Min.

Saint-Maximin, often regarded as the shining light in an otherwise bleak Steve Bruce team, has struggled in recent weeks.

The Frenchman has not provided an assist since September’s draw away at Watford while he hasn’t scored since the home game against the same opposition in January. While that does not necessarily tell the whole story given he still produces a team-high 3.92 shot-creating actions per game (via FBREF), some of his recent performances have left an awful lot to be desired.

Linked away to the likes of Aston Villa, Everton and Wolverhampton Wanderers, this report follows one from The Daily Mail suggesting Saint-Maximin wants fresh terms despite only signing a new deal reportedly worth in the region of £72k-per-week in October 2020.

For their part, the club are thought to be unsure as to whether sanction an improvement on that, just as Eddie Howe was keen to ensure the club didn’t break their wage structure over the course of the January transfer window despite PIF investment after the October takeover.

Does Saint-Maximin warrant a new deal?

It would seem unlikely he would get one, despite the newfound wealth at Newcastle.

When profiling the club’s interest in Brighton’s technical director Dan Ashworth, The Athletic stated “Newcastle are keen to establish that, in spite of their backing by Saudi Arabia’s wealthy Public Investment Fund, they are not in the habit of signing blank cheques.”

Given Howe was eager to keep the wage structure in tact and appears to be fostering a huge amount of team spirit, offering Saint-Maximin a new deal does not seem in keeping with that.

That’s not to say the 25-year-old cannot put himself in a position to earn one, it’s just hard to countenance it at the moment.

What has been said about Saint-Maximin?

Speaking to Football Insider, pundit Kevin Campbell suggested the club should look to rid of the player.

“We know what a brilliant player Saint-Maximin is and he has been a match-winner for them but he has also struggled with injuries.

“Eddie Howe has had him for a season and maybe he has decided that he wants somebody who is more to his liking. Who knows what is going on in the background.

“If they are looking to sell him then Eddie Howe will be looking at other wingers who suits his style better.”