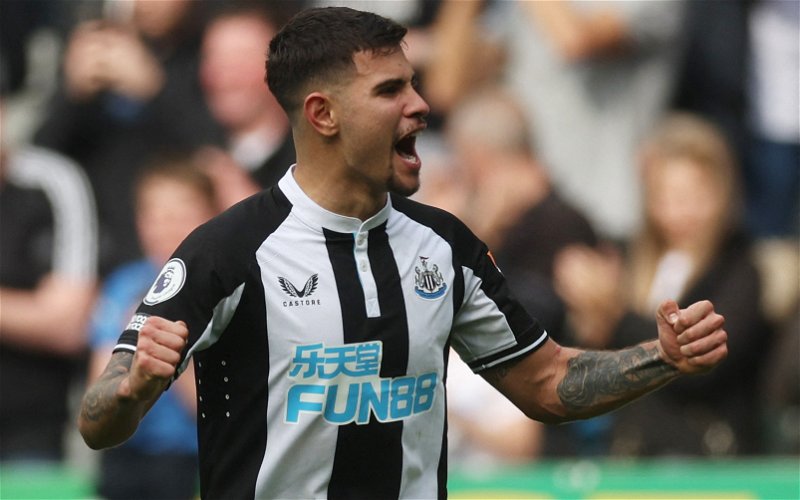 Bruno Guimaraes followed up his game-winning two-goal performance against Leicester on Easter Sunday by claiming he wants to become a Newcastle United “legend”.

Already a hugely popular figure at the club after making a huge impact following his £40m move from Lyon in January, the Brazilian international’s brace won Newcastle their second successive three points.

While not exactly brought in to score goals, the 24-year-old has won his side six points alone in just 11 games, only five of which have come from the start.

The headline signing of the PIF era so far, club directors such as Mehrdad Ghodoussi and Jamie Reuben have praised Guimaraes on social media, and his arrival looks to have been a game-changer for Newcastle.

How well did Guimaraes play against Leicester?

In all honesty, Newcastle were perhaps lucky to come away with all three points.

Still, Guimaraes – just as he did against Wolves – shone. Only Miguel Almiron and Allan Saint-Maximin completed more dribbles for Newcastle (4 to 3, via WhoScored), no one had more shots on target (4) and only Emil Krafth completed more tackles (7 to 4). Once again, it was an all-action display from a player who looks to have settled impressively quickly.

What did Guimaraes say after beating Leicester?

Speaking to Sky Sports after the game, Guimaraes said: “What a feeling! What a game! To score two goals was brilliant, I don’t have words. It was always my dream to play in the Premier League. I am so happy. It was my first header, really! That goal was for the group. We are so happy today. It is really important for me to score my first goal at St. James’ Park. I enjoyed playing here a lot, this is my home, I want to play 100 times here. I want to be a legend here.”