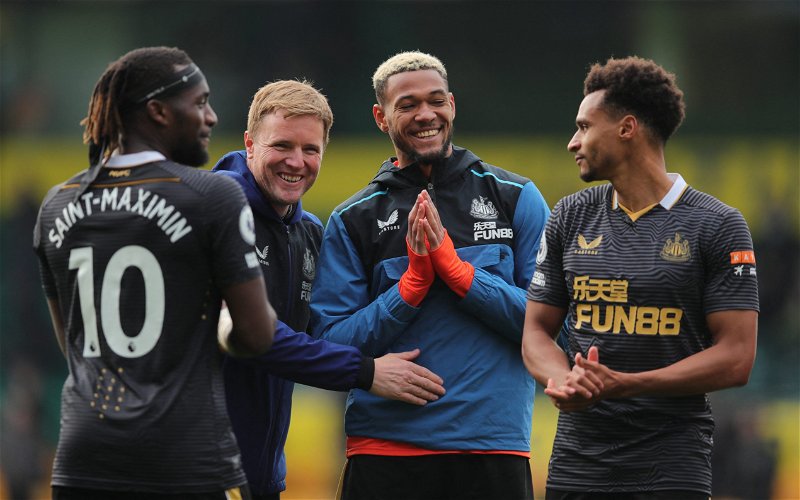 Allan Saint-Maximin believes Newcastle United can become one of the best teams in the Premier League.

While many will point to the money Newcastle spent in the January transfer window, the improvement Eddie Howe has fostered from the players he inherited has been hugely impressive.

Indeed, the impact the head coach has made makes the idea of next season even more exciting. Of course, more investment into the team will be exciting to see, although it’s going to be fascinating to watch Howe potentially develop the likes of Joe Willock and Joelinton even further.

Saint-Maximin, meanwhile, might not have hit consistent heights under Howe, although there have been suggestions that the former Bournemouth manager is excited to work with the Frenchman even despite transfer links with a move away.

Finally, Newcastle have ambition and Saint-Maximin is backing the club to go on a journey from here.

What did Saint-Maximin say about Newcastle?

Speaking after Saturday’s win over Norwich, the 25-year-old said (via BBC Sport): “Everyone can see now a great future for Newcastle.

“I’m sure we’ll start to be one of the best teams in the Premier League. For that to happen we need to work hard in every training. I know the owner and the manager will do everything to improve the team.

“Everyone can score any time. That’s why we can be one of the big teams in the Premier League.

“It’s really exciting. I think every player can really want to be part of this team. We have great supporters, a great city, one of the best leagues in the world. I think the future for Newcastle will be really good. We’re the most rich club in the Premier League and I’m sure so many good things will start to happen.”

Will Saint-Maximin play a part in Newcastle’s future?

Despite being one of the club’s leading players since he arrived in 2019, Saint-Maximin has been linked with an exit.

Howe, however, has stressed the player’s “long-term” future is at St James’ Park.

“I’ve got a great relationship with Maxi,” he said (via talkSPORT).

“I’ve really enjoyed working with him and we need him at his very best levels. He could potentially be the difference. “He’s an incredible talent and of course he has a long-term future at the club.”