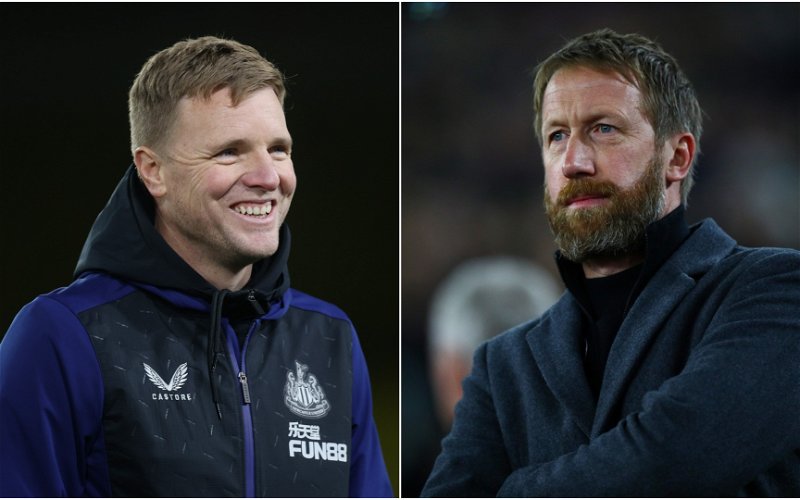 Newcastle United host Brighton on Saturday in what looks like another favourable fixture amid the club’s seven-game unbeaten streak.

Now, few would doubt Graham Potter’s side boast quality and, as Newcastle found out last season, have more than enough to beat them.

Still, this is a different Newcastle to the one who suffered two 3-0 defeats at Brighton’s hands under Steve Bruce. They battled to a point down at the Amex Stadium in November and have since improved in pretty much every area, both because of new signings and a rapid-fire improvement from their current players.

While the recent run of good form has taken the pressure off of this game, a win would likely ease any lingering relegation fears. Given 35 points has been enough to keep a team in the Premier League over the last three seasons, victory would mean Newcastle only need around seven points from their final twelve outings.

With an in-form Southampton, Chelsea and Tottenham up in the next few games, three points would not go amiss.

The Premier League game will kick-off at 3pm GMT at St James’ Park on Saturday.

Martin Atkinson will be the referee with Lee Mason on VAR duty.

Allan Saint-Maximin recently revealed he was “back” after his two-game injury absence, although the Frenchman did not join the team in training earlier in the week. Whether or not that means he won’t play remains to be seen but previous reports have claimed the club do not wish to risk him.

Such is his importance to the team, perhaps keeping him fresh for the busy schedule next week would be wise.

Elsewhere, Javier Manquillo was an unused substitute away at Brentford last weekend and could potentially replace Emil Krafth at right-back, although tinkering with a winning team too much may cause problems.

For Brighton, influential defender Adam Webster is likely to miss the game. In the eight games they’ve played without him this season, Brighton have won only once and have conceded five goals in the last two outings in his absence.

On a great run of form at the moment and in front of a home crowd, Newcastle can approach this with confidence. Given Brighton’s recent defensive problems, a home win looks very possible.