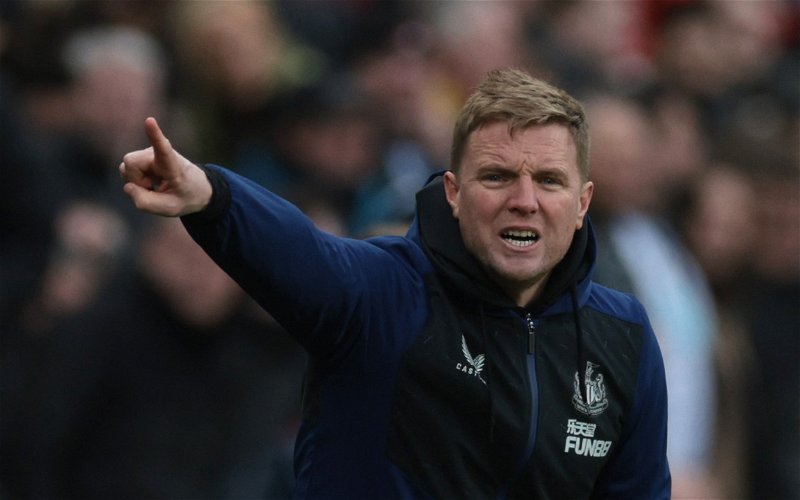 Eddie Howe will consider changes ahead of Thursday’s trip to Southampton, according to The Chronicle.

Only Liverpool can better their record over the last six games and the seven-point gap between them and the relegation zone certainly looks healthy. Indeed, such has been the form of the team, it’s tempting to want to see this group of players continue.

Still, this is a huge week for the club. While the recent spell would suggest Newcastle can approach games against Southampton, Chelsea and Everton in full confidence, a few bad results could leave things looking less comfortable.

So then, Howe could ring the changes to keep the team fresh.

What changes could Howe make?

Allan Saint-Maximin’s return against Brighton could lead to him starting down at St Mary’s in place of Jacob Murphy, while surely Javier Manquillo will replace Emil Krafth at some point over the next week given his form prior to an injury picked up against Aston Villa.

Bruno Guimaraes could also feature. The Athletic‘s Chris Waugh suggested on Saturday that: “in terms of Guimaraes, I think there is a good chance he will start one or more of the next few games, yeah. His composure on the ball may be crucial in away matches, and Howe has already hinted at rotation, so I think there’s a good chance we’ll see him start soon.”

With Jonjo Shelvey himself admitting his performance during the win against Brighton was not up to scratch, fans might finally be treated to the sight of Guimaraes from the start having only seen glimpses of him thus far.

Southampton themselves are coming off a bad result and unleashing the Brazilian international would seem wise, particularly with Chelsea up next. If Newcastle can get a point away at St. Mary’s, it will further underline their progress considering Saints’ dominant home form.