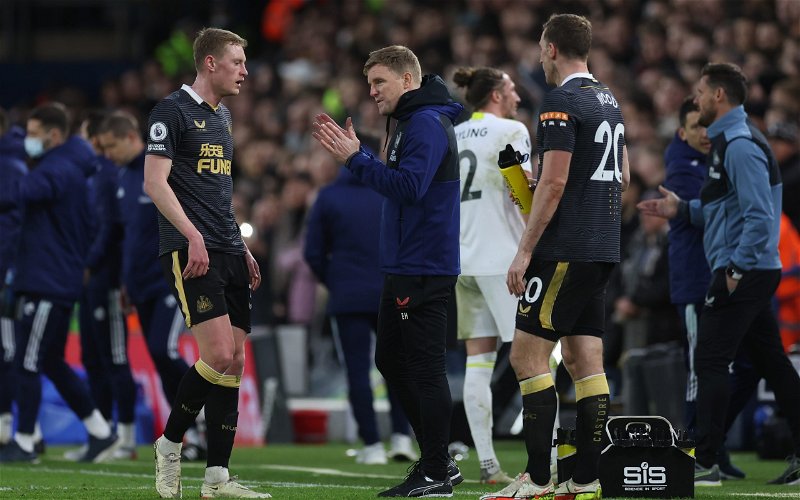 Eddie Howe is keen on keeping Sean Longstaff at the club despite the midfielder’s contract expiring at the end of the season.

Once heralded as “the new Michael Carrick” following his emergence under Rafa Benitez, Longstaff’s career has stalled in recent years. The midfielder himself admitted links with a £50m move to Manchester United not long after his first-team debut had distracted him somewhat and, frankly, he’s looked a long way off the player Newcastle fans first saw back in 2019.

Still, that doesn’t mean there is no talent there. Under Howe’s stewardship, the likes of Joelinton, Ryan Fraser and Fabian Schar have all improved and, at 24, the academy graduate certainly has a lot of his career ahead of him.

According to Craig Hope, Howe is keen on keeping Longstaff at the club but there are no talks planned as things stand.

When does Sean Longstaff’s contract expire?

Longstaff is only under contract on Tyneside until June 30, 2022.

Previously, he’s been linked with moves to the likes of Everton and Southampton and – back in August – The Athletic revealed contracts talks had broken down before as his agents were keen to move him into the club’s highest wage bracket after his initial breakthrough.

What has gone wrong for Longstaff?

In November 2020, Miguel Delaney of The Independent revealed some sources behind the scenes at the club were suggesting Longstaff had suffered due to the lack of modern coaching under Steve Bruce.

What has Howe said about Longstaff?

Despite the fact Longstaff has only been handed 317 minutes of action since Howe’s appointment in November, the Newcastle head coach has talked in glowing terms about the player.

“I love Sean, but I maybe haven’t displayed that with my team selections,” he said (via Keith Downie).

“I really do rate him highly. I believe he has a long-term future here.”