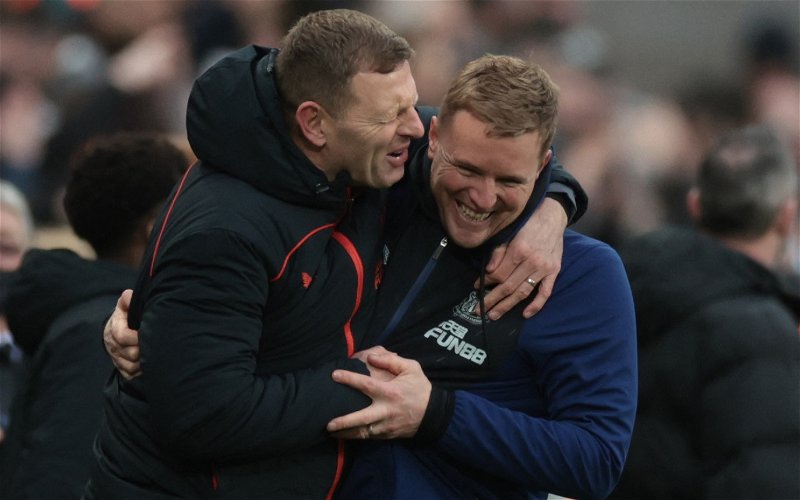 Graeme Jones remains an important key in the Newcastle United cog even after Eddie Howe’s arrival, according to The Chronicle.

A popular figure amongst the support after his move from Bournemouth brought about a huge improvement in Newcastle’s form last season, Jones was placed in charge after the departure of Steve Bruce following the PIF takeover in October.

While the 3-0 home loss to Chelsea was disappointing, the two away points the team battled to against Crystal Palace and Brighton respectively could be crucial come May. Indeed, had Newcastle not won them, their situation upon Eddie Howe’s arrival would have been even bleaker.

When Howe was appointed and brought in Jason Tindall, Stephen Purches and Simon Weatherstone, Jones might have been reasonably expected to leave. After all, the 51-year-old has been a manager before, albeit during a difficult spell with Luton, and certainly enhanced his reputation at Newcastle, as well as when working under Gareth Southgate with the England team at Euro 2020.

Still, the report reaffirms the fact that Jones’ “coaching skills and experience of operating at the highest level” remain valued at the club. Interestingly, it is also claimed that the appraisal Howe received from Tindall, Purches and Weatherstone helped convince the head coach to keep Jones on the staff.

Does Jones want to be a full-time manager?

Of course, the situation may change going forward but Gary Brabin, who worked under Jones at Luton, told The Athletic in October: “I’m not saying he’ll never have another go but he doesn’t have that real desperation.

“He’s content being an assistant at his boyhood club.”

What has Howe said about Jones?

Speaking after winning February’s Premier League Manager of the Month Award earlier this month, Howe said (via The Shields Gazette): “The coaching team has been very, very good and Graeme Jones, who I hadn’t worked with before, I must praise him too, because he’s become an integral part of my team. This isn’t about me, but about the collective.”