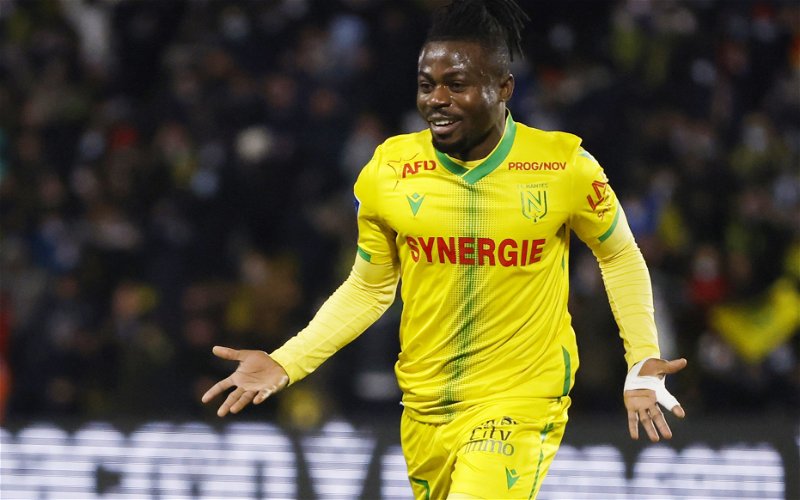 Newcastle United are keen on a move for Nigeria international Moses Simon, according to Own Goal Nigeria.

While the first transfer window of the PIF era was certainly successful, the lack of firepower in the squad is a worry. Chris Wood is yet to settle (albeit these are early days) and Callum Wilson’s patchy injury record has deprived Eddie Howe of one of the most lethal forwards in the bottom half of the Premier League.

Allan Saint-Maximin is producing more in the ways of goals and assists, although Ryan Fraser, Jacob Murphy and Miguel Almiron have all lacked end product.

To that end, perhaps Simon could offer something different. Hugely impressive during the Super Eagles’ Africa Cup of Nations run, the FC Nantes winger has scored two goals and registered six assists in 16 Ligue 1 starts this season.

According to the report, the former Genk man would cost around £20m and has previously attracted the interest of Leeds United.

What is Simon’s style of play?

Able to operate across the frontline, Simon has been described by Goal as “more a winger than an inside forward, but stylistically he is more an inside forward than a winger. Unlike the pure winger, he starts on the wrong side; unlike an inside forward, he is not as focused on either taking up goalscoring positions or creating shots for himself.”

Statistically at least, FBREF compare him to the likes of Demarai Gray and Bukayo Saka in a Premier League context, although the Everton and Arsenal stars have produced more in the ways of goals this season. Still, they also note that Simon ranks within Europe’s leading 93% of wingers playing across the big five leagues over the past year for assists per game (0.36).

What has been said about Simon?

Although Nigeria were eliminated by Tunisia in the round of 16 after a strong start, Simon had been praised on an individual basis.

Own Goal Nigeria describe him as “by far the best Nigerian player at the tournament” while The Athletic’s Carl Anka wrote “I expect Moses Simon to be linked with a Premier League club by the end of the month” on the back of his performances.