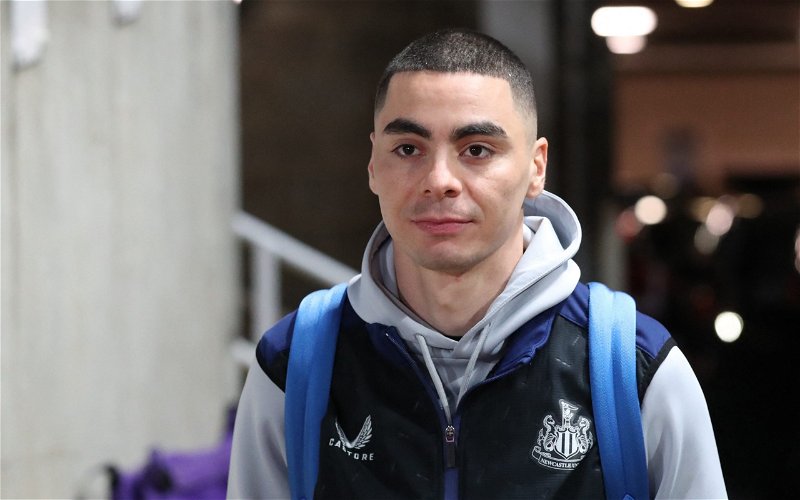 Miguel Almiron faces talks with Newcastle United at the end of the season regarding his future at the club, according to The Chronicle.

The big-money signing of the Rafa Benitez era, Almiron barely got to play under the Spaniard after Mike Ashley finally broke the club’s long-standing transfer record in the winter of 2019 to bring him to St James’ Park.

While certainly a useful player over his time on Tyneside, the 28-year-old has fallen behind the likes of Allan Saint-Maximin and Ryan Fraser under Eddie Howe and has not scored since a dramatic win over Southampton roughly a year ago now.

Since Howe arrived, the Paraguay international has started only three times in 13 games and does not appear to have a natural place in the starting lineup.

The system looks to be the issue.

Noted as having been “liberated” after Graeme Jones and Steve Bruce deployed a split striker system towards the back end of last season, Almiron’s work rate and ability to cover a lot of ground looked well-suited to that formation.

In fact, last year, FBREF data notes that Almiron was amongst the five Newcastle players to have pressed the highest number of times per game (18.7) in a fairly passive Bruce team.

Still, Howe has largely adopted a 4-3-3 system since he arrived and, with Fraser finally emerging as the kind of player we saw at Bournemouth, Almiron has his work cut out to command a starting berth.

What has been said about Almiron’s future?

Speaking to the press in South America last month, agent Daniel Campos suggested there was interest in the player from Spain and Italy.

“Miguel Almiron’s exit clause from Newcastle is close to 80 million dollars [around £60m],” he said (via Newcastle World).

“In June we will see what the club says, I have polls from clubs in Spain and Italy.”