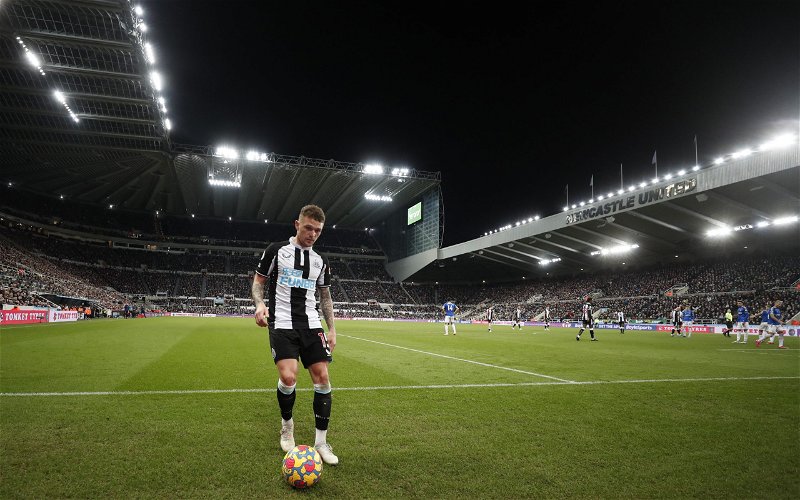 Newcastle United could be without Kieran Trippier for Sunday’s crunch Premier League game with Aston Villa, according to The Daily Mirror.

Trippier, who has been lavished with praise in the wake on Tuesday’s huge win over Everton, appeared to limp off with a calf injury during the dying embers of the game.

Already looking like the beating heart of this Newcastle side, the England international had the most touches (76, via WhoScored) of any of Eddie Howe’s players, attempted 10 crosses, played 4 key passes and made the second-highest number of tackles (7-5 to Joelinton) during the game.

Even away from statistics, which don’t take into account the sheer emotion and leadership of the man, Trippier was described as having “set the tone for everything tonight, lifting his own players after the concession, snapping into tackles” by George Caulkin.

Clearly, missing him for a home game Newcastle surely have a chance of winning when at their best, is potentially a major blow.

Who could replace Trippier against Villa?

The obvious choice is Javier Manquillo, although the fact Matt Targett cannot play due to the terms of his loan move from Villa does complicate matters. Ideally, the Spaniard would operate on the left with Jamal Lewis not included in the 25-man squad and Matt Ritchie struggling to match previous heights.

If that’s the case, the likes of Jacob Murphy and Emil Krafth look like massive downgrades on Trippier on the right-hand side, although perhaps Ryan Fraser could be deployed as a wing-back should Howe opt for a three-man backline.

There are options but, given how well Trippier has played since joining, none of them look anywhere near as good.

What has Howe said about Trippier?

Speaking after the Everton game, Howe admitted missing Trippier would be a huge blow.

“I think Kieran’s got a slight calf issue,” he said.

“He motioned that he needed to come off, so we’ll have to see how that is.

“It would be devastating to lose him in the form he’s in.”