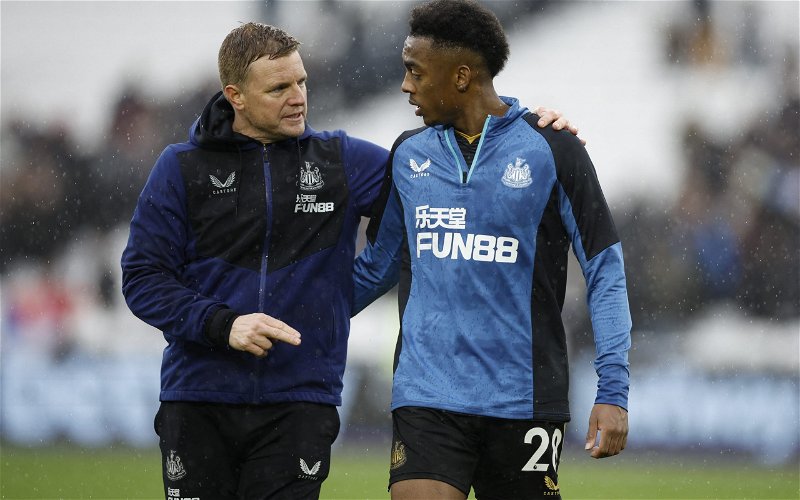 Eddie Howe held “frank” discussions with Joe Willock in an effort to coax the best back out of the midfielder, according to The Daily Telegraph.

The final signing of the Mike Ashley era, Willock’s struggles this season had summed up the wider drop in performance at the club after last season.

Seven goals in seven games to finish the last campaign gave some real hope that, after a big-money permanent move, Newcastle finally had a box-to-box midfielder capable of easing the attacking burden on the likes of Callum Wilson and Allan Saint-Maximin. A young, talented footballer looking to prove himself in the Premier League, the notion of capturing him on a long-term basis was hugely exciting.

Still, until recently, Willock had struggled.

According to WhoScored data, the 22-year-old’s underlying numbers took a significant hit after his permanent move, although much of that could be put down to the wider problems in the team under Steve Bruce.

Why did Howe hold discussions?

The report suggests Howe “did not like what he saw in training or games” from the player and devoted more time to improving him than anyone else in the squad.

Clearly, there’s a long way to go, but Willock does look to be getting back to his best. Hailed as a “baller” by Luke Edwards after the crucial win over Leeds United in January, he scored his first goal of the season in last weekend’s draw away at West Ham.

What has Joe Willock said about Eddie Howe?

Speaking after the West Ham game, Willock was full of praise for Howe.