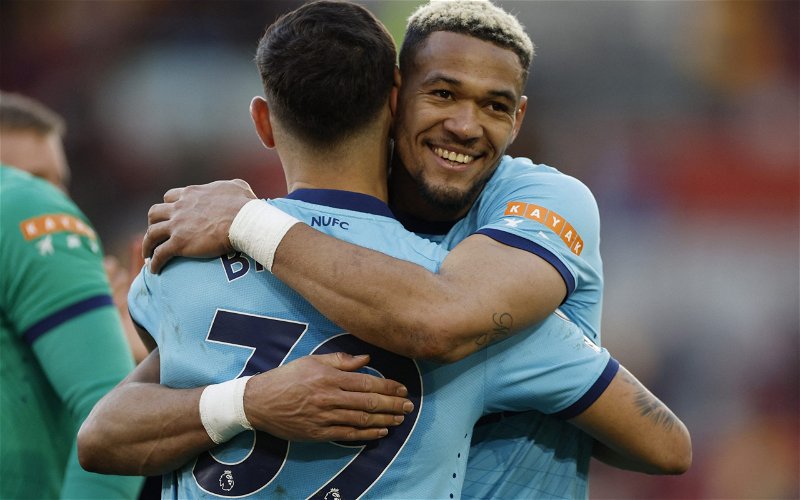 Joelinton has benefited from the arrival of Bruno Guimaraes, according to The Athletic.

Since Eddie Howe’s arrival, the 25-year-old has emerged as one of the team’s key players. Moved into midfield, the Brazilian has been one of the driving forces of Newcastle’s revival and capped off a stunning turnaround in form with a crucial goal away at Brentford to set the team on their way for a massive victory.

Howe has constantly talked of Joelinton’s ability and the player himself dedicated his goal to the club’s fans for supporting him during the difficult spell he endured following a, frankly, bizarre £40m move from Hoffenheim in 2019.

What has Guimaraes’ arrival done to Joelinton?

While Joelinton, Jonjo Shelvey and Joe Willock have quickly established themselves as Howe’s first choice midfield for now, Guimaraes will surely overtake one of them long-term.

The headline arrival of the PIF era so far, the former Lyon midfielder has had to bide his time given the impressive form of his teammates and impressed during his 26-minute cameo in West London on Saturday.

Behind the scenes, Joelinton is said to have benefited from his signing. Indeed, the two are though to have developed a close bond already, helping to further settle into the area.

What has been said about Joelinton?

“He absorbs the information quickly and is able to deliver,” he said (via Football 365).

“There’s been no sense of us carrying him defensively, far from it.

“Naturally, he has an attacking eye, he takes up some really good positions under pressure, in tight areas he’s been very, very good.

“We need him to score from that position and he was the man who got that first goal for us. Hopefully he can get many more arriving late in the box.”