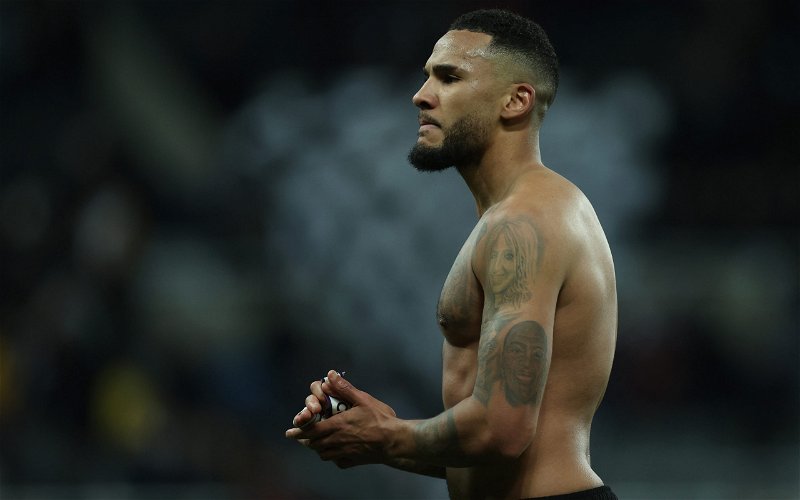 Jamaal Lascelles is thought to have been “galvanised” by Kieran Trippier’s arrival at Newcastle United, according to The Athletic.

Club captain Lascelles, who has largely been a popular figure amongst the club’s support over the years, was enduring his most difficult campaign at Newcastle to date until recently. While seemingly constantly selected, the 28-year-old’s performances had dropped dramatically and there were even suggestions Trippier could replace him as skipper.

Still, the report suggests that Lascelles has enjoyed the leadership and sense of authority the former Atletico Madrid star has brought into the dressing room. Though, of course, there’s no way of proving the two are related, it does seem to have helped Lascelles’ form after impressive performances against Leeds United and Everton.

How badly was Lascelles playing and has it changed now?

Prior to the January window, Lascelles had often invoked the ire of supporters.

While the failings of the team’s defence can not simply be attributed to him alone, the former Nottingham Forest defender was in shocking form. Criticised by Alan Shearer for his role in Watford’s late equaliser last month, Lascelles had also been given a 3/10 by The Chronicle after the 4-0 loss to Leicester City in December.

Since, however, there appears to have been a marked improvement. Praised for his performance against Everton even despite scoring an own goal (which he could do little about), things appear to be on the up for him.

Lascelles’ attitude has rarely ever been questioned with former manager Rafa Benitez installing him as captain at a relatively young age in a rebuild of the dressing room having been impressed with his leadership. While there have certainly been concerns as to his quality, it’s brilliant to see him back in form.