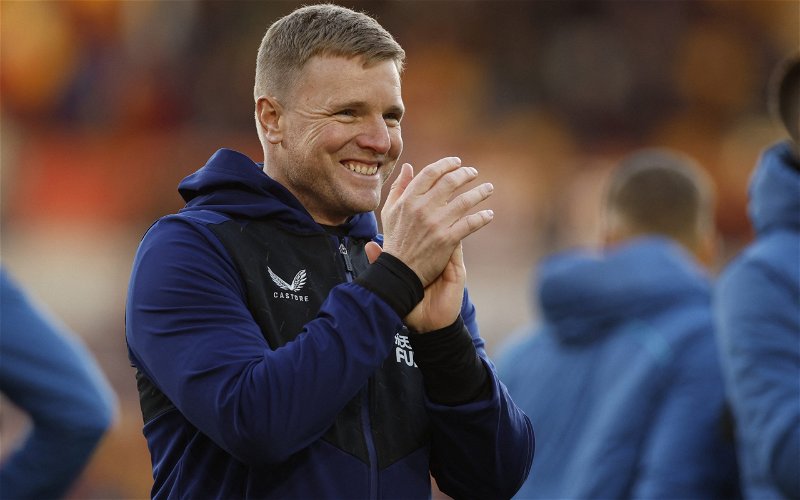 Eddie Howe has insisted he is not getting carried away with Newcastle United’s recent run of good form.

With the team on a seven-game unbeaten streak and putting daylight between themselves and the relegation scrap below, optimism is currently aplenty on Tyneside. Indeed, after a difficult start, Howe has turned the team around and the fact Unai Emery snubbed overtures to replace Steve Bruce back in December now looks like a blessing in disguise.

Perhaps what has been most impressive about Howe’s time has been the improvements he’s yielded from players who looked lost under Bruce at the start of this season. Yes, many will point to the fact Newcastle spent almost £100m over the course of the January window, but that doesn’t necessarily explain the rapid-fire growth from the likes of Joe Willock, Ryan Fraser and Joelinton to name just a few.

What has been said about Howe?

The first head coach of the PIF era, the former Bournemouth coach looks a good fit and the imminent arrival of Dan Ashworth in a sporting director role will likely only improve things behind the scenes.

In fact, the directors even suggested they were keen for the 44-year-old to grow into a Sir Alex Ferguson-type role at Newcastle, staying at the club for a long time and enjoying almost constant success.

“I would love Eddie to be the next Alex Ferguson,” said Ghodoussi.

“Yeah, I would,” Staveley agreed. “We know Eddie has the ability to keep us up. And it was always with a view to a long-term future. We hope and think that Eddie will be with us for a very long time.”

How has Howe reacted?

Even if managers still enjoyed the kind of time they could realistically ask for in years gone by, there is obviously no guarantee Howe would get anywhere near to the trophy haul Ferguson managed at Old Trafford. Comparing anyone to arguably the greatest manager of all time is a tough ask.

The sentiment, however, is at least promising.

For his part, Howe talked of how he was simply focusing on the here and now after beating Brentford on Saturday.

“For me, the focus is getting enough points to stay in the division and I’m not looking anything beyond that,” he said (via The Chronicle).

“That doesn’t mean I am not looking at the football club and making good decisions for that.

“I appreciate the words but for me the next game and making sure we have enough points to stay in the division.”