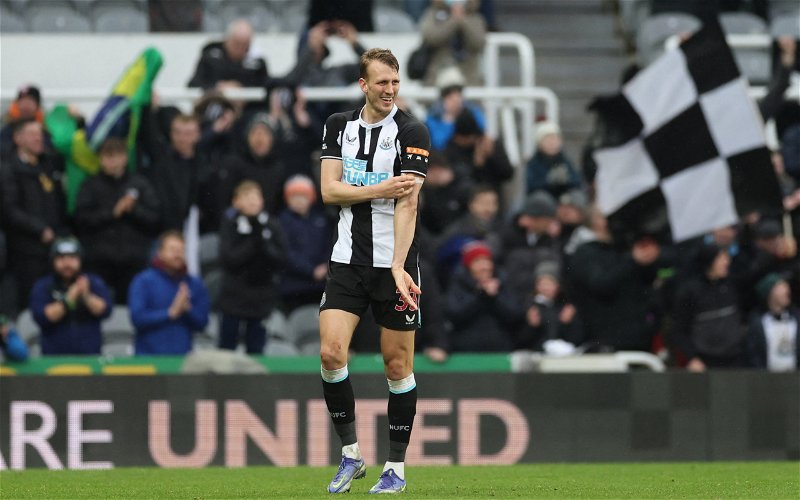 Dan Burn has been hailed as “the most important signing” Newcastle United made over the course of the January transfer window.

While Burn may have seemed like a last resort for the club after failed pursuits of the likes of Sven Botman and Diego Carlos, his Newcastle debut will surely live long in the memory.

A colossal presence in the backline during the crucial win over Aston Villa, Burn was handed the Man of the Match award for his performance and his Premier League experience looks absolutely crucial in a Newcastle backline up there with Norwich City as the worst in the division.

For a reported £13m, the 29-year-old looks like a major upgrade on what Eddie Howe had before.

How well did Dan Burn play against Aston Villa?

Described as an “assured, calming presence” by The Chronicle, the former Brighton defender was excellent.

According to WhoScored data, he made three clearances while FBREF note no Newcastle player to have played the full game averaged a higher pressing success rate (42.9%).

Away from the cold, hard statistics, the fact Burn threw part of Tyrone Mings’ shirt into the crowd after the tussle spoke of a warrior enjoying the battle inside a raucous St James’ Park.

What has been said about Dan Burn?

“They needed a centre-back so badly, that was obvious,” he said.

“They have one now and he was solid against Villa. So if he gets injured, then you worry.

“Then Newcastle are back to the defence that was conceding goals for fun.

“Trippier being injured is a blow, yes, but Burn getting injured would be worse.

“He has so much experience and he’s a Newcastle fan, he will die for that club, you can’t buy that.

“As long as he stays fit, I think Newcastle will be fine because he will beat the teams you would expect them to beat.

“I honestly think Burn will be their most important signing from January.”