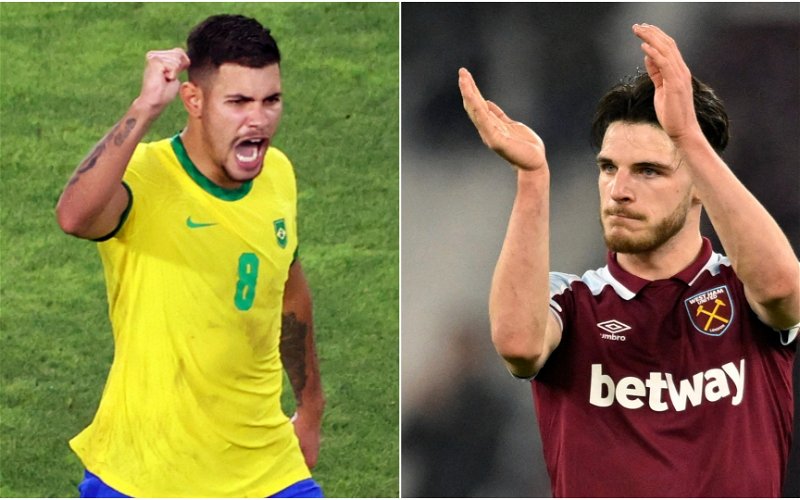 Bruno Guimaraes has been compared to Declan Rice after signing for Newcastle Untied over the course of the January transfer window.

While Kieran Trippier was the first arrival of the PIF era, Guimaraes looks like the marquee one.

A Brazilian international previously tracked by the likes of Arsenal and Everton, French football experts Julien Laurens and Tom Williams have both been effusive in their praise of the 24-year-old.

Signing a four-and-half-year deal on Tyneside, it’s quite the coup to bring him to a Newcastle side fighting relegation and surely the hope is Guimaraes will have a transformative effect on a midfield who have struggled to convince for so long.

What has been said about Bruno Guimaraes and Declan Rice?

Speaking to Football Insider, pundit Noel Whelan was effusive in his praise of the Brazilian.

“They needed someone who can control the game and the tempo, and I think he’s going to bring that to Newcastle,” he said.

“You could see that in their game against Leeds. They were lacking in that midfield area.

“He will bring some real quality and top-level experience to the side. He can start attacks off, very much like an N’Golo Kante at Chelsea, Kalvin Phillips at Leeds, or Declan Rice at West Ham.

“It was a very clever move. They’ve got that marquee signing that the fans were holding out for, and they’ve built around him as well.

“He could be a really great success and a fan favourite at St James’ Park.”

Interestingly, EuroSport claimed back in October that Rice had been looked at by the Newcastle owners as a potential future signing.

How do Guimaraes and Rice actually compare?

Rice, one of England’s best players during their run to the Euro 2020 final, has previously been priced at over £100m.

Clearly, it’s worth taking into account the fact Rice has been playing Premier League football and a direct comparison might not be completely fair given the difference in playing styles. Still, FBREF data does make things look rather favourable for Guimaraes.

Comparing some of their statistics this season, the Newcastle man edges the West Ham star for average progressive passing distance per game (304.9 yards to 243.5 yards), passes into the final third per game (8.24 to 6.36) and successful passes made while under pressure per game (12.3 to 8.14).

In terms of driving at the opposition, Guimaraes shades things again, averaging 0.16 dribbles that lead to shots per game in comparison to Rice’s 0.09. The England international, however, comes out on top when it comes to the percentage of successful pressing actions over the same period (32.5 to 31.9).

Obviously, that does not definitely mean one is better than the other but it certainly makes for promising reading.