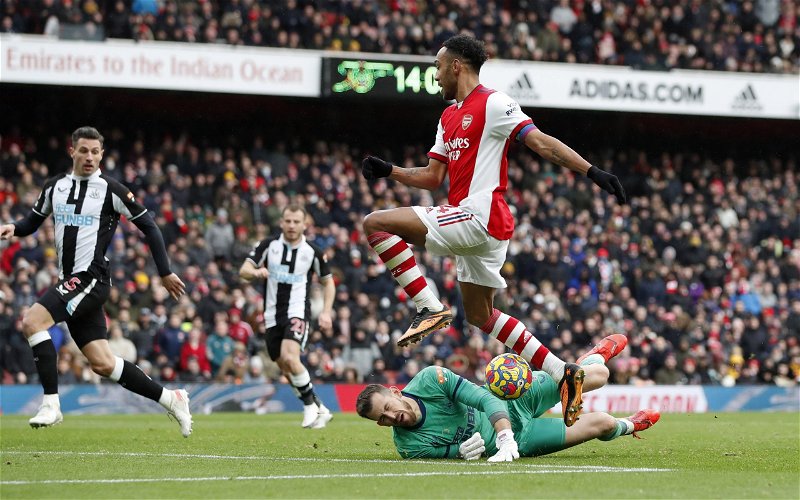 Newcastle United are interested in a surprise move for Arsenal forward Pierre-Emerick Aubameyang, according to The Daily Mirror.

While many of the names linked with a move to St James’ Park ahead of the first transfer window of the PIF ownership have been defensive ones, Callum Wilson’s injury has complicated matters.

Indeed, iNews recently suggested those in charge of the club would now look to sign a striker in an attempt to replace Wilson’s goals and this report links Newcastle with what would be a shock move.

Stripped of the captaincy by Mikel Arteta over a disciplinary breach, Newcastle have reportedly sounded out Arsenal over a potential loan move in January ahead of a permanent £20m switch in the summer.

Is this likely to happen?

One would imagine that Arsenal would jump at the chance to sell the 32-year-old, who is reportedly on a contract worth around £350k-per-week, given the struggles they faced when trying to rid of Mesut Ozil once he dropped out of the team.

While the Gabon international has been one of the most lethal strikers in Europe over the course of his career, however, it would be an almighty risk for Newcastle. Form has dipped since the former Borussia Dortmund star signed a new deal in 2020 and Aubameyang is due to depart for the Africa Cup of Nations this month.

Even if he were to arrive, there’s a chance he couldn’t even play until February when Eddie Howe desperately needs improvement right away.

Does Aubameyang have any history with Newcastle?

In 2018, The Chronicle revealed that Newcastle were “desperate” to sign the forward from Saint Etienne back in 2012, back when the club would often plunder the French market and before he moved to Germany, thereby raising his profile.

Prior to the Olympics in 2012, Gabon also played a friendly against Heaton Stannington as they were in the North East with a famous photo of Aubameyang in action at Grounsell Park taken on the day.