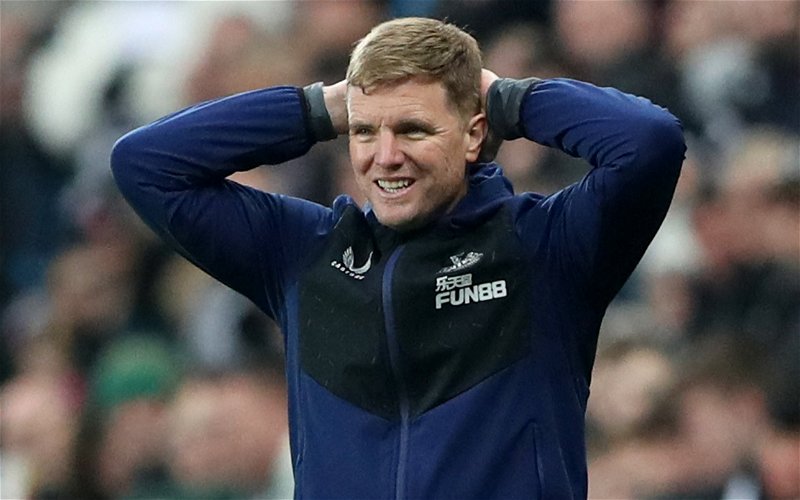 Newcastle United could be close to sealing two more deals as their January transfer window business continues although the club are finding things “tough”, according to journalist Luke Edwards.

While the additions of both Kieran Trippier and Chris Wood have certainly been promising, there must be some frustration in regards to the club’s pursuit of a central defender. Indeed, Lille have ruled out Sven Botman’s sale while a £28m offer is believed to have been rejected by Sevilla for Diego Carlos.

Trippier and Wood – as good as they are – don’t address some of the major problems in the side. Considering how weakly Newcastle defend leads, it seems fair to criticise the spine of the team, particularly given only Burnley allow more shots on their goal per game and only six teams (who all generally enjoy more possession than Newcastle) win the ball back on fewer occasions over the same period (via WhoScored).

To that end, the of idea further additions, particularly after the deflating draw at home with Watford on Saturday, is certainly promising.

What did Luke Edwards say about this week?

Writing on Twitter, The Daily Telegraph journalist said: “Two deals are close apparently but until they are done they’re not done and no point hiding fact #nufc are finding it tough.”

Obviously, it’s important not to get carried away. Deals can always fall at the final hurdle with the managerial chase of Unai Emery back in November a prime example of that.

Still, to give the ownership their credit, they have at least brought two new signings in crucial areas in thus far. The January market, after all, is famous for being a particularly difficult one.

Way back in November, Football Insider claimed Eddie Howe had targeted three signings upon his appointment as the first head coach of the PIF era.

They are believed to have been two central defenders and a central midfielder, two areas of the squad utterly neglected for much of the last five years during the Mike Ashley era. Joe Willock was the first permanent signing in the middle of the park Newcastle have paid for since the 2017 addition of Mikel Merino, while no specialised central defender has been purchased since 2018.

Surely, any new signings have to come to strengthen those departments as soon as humanly possible.