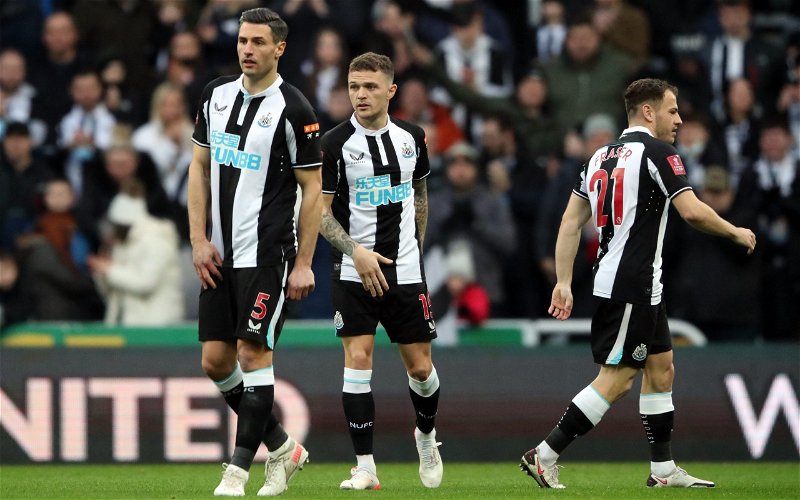 Fabian Schar could be of “surprise” interest to French outfit Bordeaux, according to The Sun’s Alan Nixon.

After Saturdays’ deflating draw at home with relegation rivals Watford, surely most of the focus will be on which players Newcastle can bring to the club during what remains of the January transfer window.

Still, as important as signings obviously are, space does need to be made within the squad. To that end, perhaps the Ligue 1 strugglers could offer a way out for Schar and Nixon says they need signings “now” after a miserable campaign which leaves them second from bottom. Indeed, former Arsenal captain Laurent Koscielny has also been exiled from the first-team, only adding to the problems.

Ideally, new signings would be made before letting players leave. While none of the defenders have covered themselves in glory this season, Eddie Howe does not have a huge amount of options as it is.

Still, though Schar might not be the biggest problem, it’s time to gut this squad. Given Newcastle’s propensity for throwing away leads, it seems the spine of the team has weakened considerably since the Rafa Benitez days and the Swiss, along with Jamaal Lascelles, Jonjo Shelvey and Sean Longstaff just do not offer any kind of solidity in the middle of the park.

That’s been something referenced by the likes of Luke Edwards and is reflected in some damning statistics. According to WhoScored data, only Burnley (who have played three fewer games) allow more shots on their goal per game (15.9) and only six teams average fewer interceptions over the same period (9.3).

Both Manchester clubs, Brighton, Arsenal, Aston Villa and Crystal Palace might win the ball back on fewer occasions but are generally considered more proactive teams, largely having much more of the ball than Newcastle.

Frankly, Newcastle’s spine (or lack thereof) make them too easy to play against and ridding of the players who give the team such a weak underbelly will not be a bad thing long-term.

What has Eddie Howe said about Fabian Schar?

Back in December, Howe praised the 30-year-old.

“Yeah, I think Fabian has been excellent,” he said (via The Chronicle).

“I have been an admirer of Fabian from afar for a long, long time.

“I think he is a fantastic footballer.

“He fits my mould as to what I want for a centre-back.”