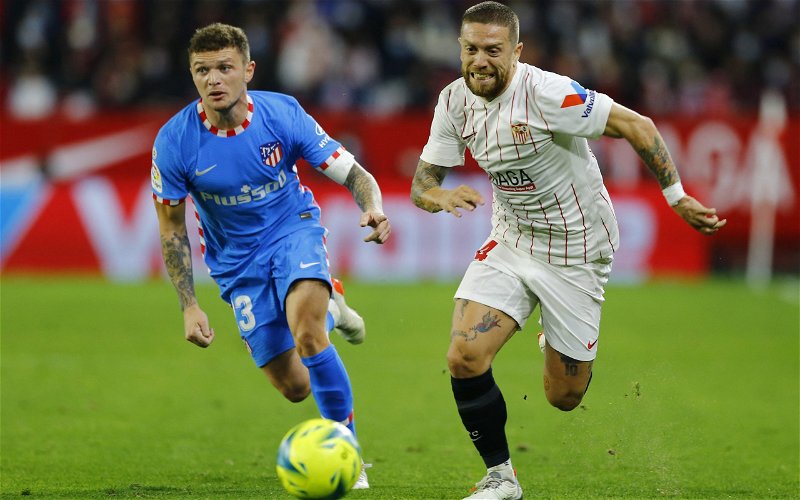 Atletico Madrid are still waiting for an official bid from Newcastle United for Kieran Trippier, according to Fabrizio Romano.

The England international has been strongly linked with a move to St James’ Park as the club’s new PIF owners look to make a statement during their first transfer window in charge.

With the defence being of particular concern to new manager Eddie Howe, Trippier is understood to have been lined up as one of the first major signings of the new era. Still, while there have been reports suggesting a deal is close, noted transfer insider Romano has hinted at the current state of play.

What did Romano say about Trippier and Newcastle?

Taking to Twitter, Romano revealed that while Newcastle are still “working” on the transfer, the Spanish champions are yet to receive a formal offer.

He also reveals that although Trippier is top of the list in terms of full-back targets, there are two others in contention.

How does Trippier compare to Javi Manquillo, Emil Krafth and Jacob Murphy?

Compared to the three players who have played at right-back over the last few years for Newcastle, Trippier has averaged more in the way of key passes, long balls and crosses per game than Krath, Murphy and Manquillo (via WhoScored). Given the increase in attacking full-backs over the last few years, boasting someone capable of adding much going forward could give Howe much more firepower.

A threat from set-pieces and proven in the Premier League, while also being able to operate at left-back, a swoop for the former Tottenham man makes total and absolute sense.

What has been said about Trippier and Newcastle?

“That tells you exactly what kind of player they are looking to bring in,” he said.

“He’s an England international and has played at the top level for years.

“Those are the kinds of players Newcastle need to sign if they are to stay in the Premier League.

“It won’t be easy to get more players of Trippier’s quality. The place isn’t very attractive at the moment.

“One win all season, in the relegation zone, other than money there is not a huge reason to go there.

“In any case, Trippier would be an amazing signing.”