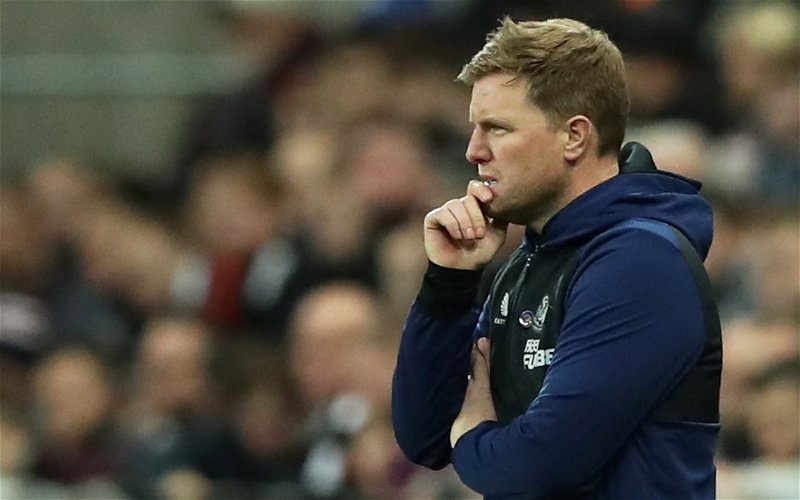 Eddie Howe has revealed he will “evaluate” the goalkeeping situation at Newcastle United in January, as per The Chronicle’s Lee Ryder on Twitter.

Such was the lack of activity in the summer transfer window, the club decided to take what was described as an “unprecedented” move to name four goalkeepers in their 25-man Premier League squad.

Alarmingly, none of Martin Dubravka, Karl Darlow or Freddie Woodman have covered themselves in glory this season either while Mark Gillespie hasn’t even been included in a matchday squad since October’s draw away at Crystal Palace.

How do Newcastle fix this?

Well, should arrivals come in as expected in January, there is an opportunity to change the squad list next month.

Of all of the ‘keepers, Gillespie would seem the most obvious to miss out. Even with injuries to Darlow and Dubravka, Woodman was selected at the start of the season and, given he’s fourth-choice, does seem like the most disposable.

Woodman, however, might attract loan interest having previously been linked with Bournemouth.

How have Newcastle’s goalkeepers performed this season?

According to FRBEF data, only Dubravka has emerged with a positive post-shot expected goals rating (which would suggest an above-average ability to stop shots) with Darlow and Woodman’s negative numbers hinting they should have saved more attempts on goal.

Indeed, even Dubravka has not been without his lapses. Arguably, he should have done better in the build-up to Teemu Puuki’s goal for Norwich City on Tuesday night and he’s only played two games this season, which perhaps explains as to why he’s got the sixth-highest average rating in the Premier League.

What did Steve Bruce say about naming four goalkeepers?

Prior to naming the squad, former manager Steve Bruce said (via BBC Sport): “It is unheard of.

“If we do a loan deal there is then no room in the squad without leaving somebody out. It’s a difficult situation as well with finances.”