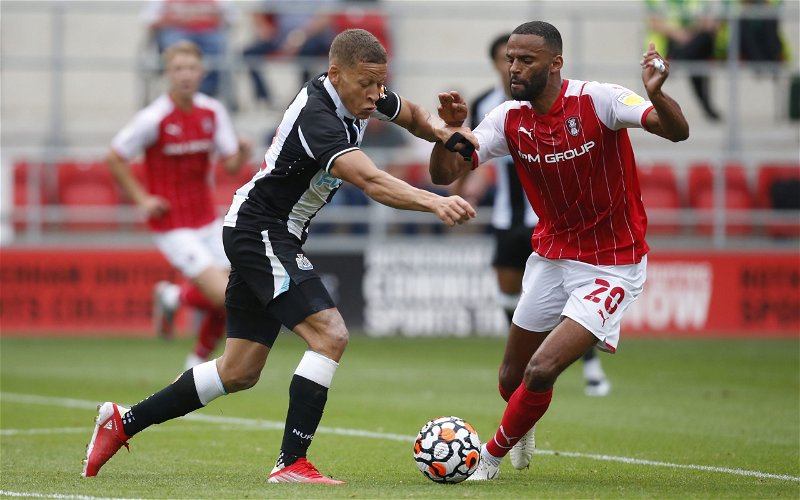 Middlesbrough and Stoke City are among the clubs keen on a move for Dwight Gayle in January, according to Football Insider.

Despite agreeing a new contract in March, Gayle has rarely been involved at all this season.

While the decision to hand him a new deal made sense at the time given risking a sellable asset leaving for free at a time where the club were not likely to invest into the team made little financial sense, the fact Callum Wilson has largely stayed fit has denied the 32-year-old much in the way of opportunities.

Both Championship clubs, along with West Bromwich Albion and Nottingham Forest are understood to be keen.

Could Newcastle allow Gayle to leave?

The report suggests that much depends on whether Newcastle can land targets of their own.

As much as Wilson has stayed fit, relying on him and him alone for a whole season is a risk. Elsewhere up front, Joelinton might be improving, but to pin all survival hopes on him seems fanciful.

So then, strikers – or at least players capable of scoring goals – need to be brought in before Gayle can be allowed to leave. As much as the former Crystal Palace striker might seem like an afterthought at the moment, he was the most reliable source of goals from striking positions during Steve Bruce’s first season, back in 2019-20.

In terms of attacking players linked with a move to Newcastle, Jesse Lingard might not be a central striker, but the England international did score nine goals in sixteen games on loan at West Ham last season. If the club can land him, perhaps Gayle can be afforded an exit.

What has Eddie Howe said about Dwight Gayle?

“Dwight, unfortunately, he suffered a slight hamstring injury, so he missed the Arsenal game,” he said (via The Chronicle).

“He’s just back to fitness.

“What I have seen is someone who can certainly score goals, is a brilliant finisher.

“I think he’s got real competition, because I think Callum (Wilson) and Dwight are very similar players, in a sense that they both lead the line.

“So it’s great to have two experienced players in that position, and two players who certainly know where the goal is.”